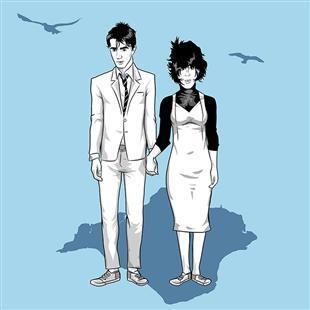 The Islanders is a highly unusual project; indeed, it is quite unlike anything one has ever come across. It is a musical written and performed by Amy Mason, who wrote the narrative, Eddie Argos (of classic rock band Art Brut) and Jim Moray, who together wrote the music.

The Islanders is presented as a musical of a trip to the Isle of Wight 13 years previously. It is a true and nostalgic account from the differing perspectives of Mason and Argos of a time when they were a couple. The account sheds an interesting light on how one’s memories of a place, a relationship, an experience can differ wildly from another’s of the same event and time, This leads the listener to question the meaning of fact, yet beautifully depicts the different dimensions, emotions and interpretations one can attribute to the past.

The different artistry of story-telling, music and the rustic voice that so typically defines traditional folk music combine to form a collective creative expression previously unexplored. This is a truly special and novel musical avenue that must be seen to be truly appreciated in its entirety.

The songs (if that is indeed the most appropriate definition for each track) are depicted with a highly upbeat, almost circus-like style to them. However the title track of the musical, and the songs Teenage Crush Stage 3 and B and B Anxiety refreshingly balance these out and gives a more melancholy and spaced vibe to the collection.

The first track, Main Theme for The Islanders is purely instrumental whereas Post Soothing Out has a definite folk theme to it with the acoustic guitar by Moray. Through such varying styles and moods, the collection of narratives gives a gritty, insightful and subtly tongue-in-cheek presentation of the life of a young, pensive person in love.

Honest, open (sometimes uncomfortably so) and raw, this funny, lively musical is likely to appeal to varying tastes. Each small anecdote gives a short and sweet insight into the world through the eyes of a young couple experiencing their first love. At times it gives a vibe of The Streets with its sing-song narrative, at other times a rock feel, and always the contemporary folk undercurrent with the story-telling style of the narrative.

Although a less prominent contributor to this creation, it is unsurprising that Moray is connected to such a contemporary, unusual and considerably non-traditional project, and a parallel in this respect can be found to his own works.