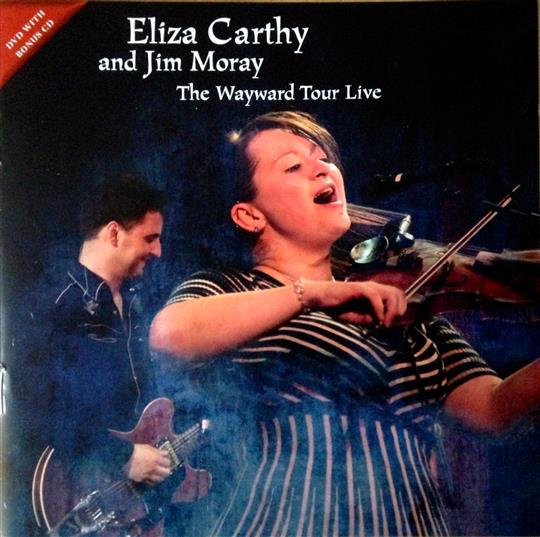 Never one to shirk or shy from doing something a bit impulsive, for once Eliza Carthy did the predictable and celebrated her twenty-one years of recording, touring and general music making with the Wayward Daughter compilation album. Expansive in its double CD-ness, it was accompanied by the more expected unpredictability of her tour with the Wayward Band.

Marshalled by Jim Moray, also managing to perform his own set at the shows to commemorate a decade of music making, the band featured a who’s who of names in the folk world; Sam Sweeney, Lucy Farrell, Dave Delarre, Saul Rose and Barnaby Stradling to name a few, joined Eliza and Jim in a big band worthy of supergroup status.

The tour truly was a cause for celebration and merry making and one which was caught for posterity in this very package, which includes both audio and video footage of Eliza’s set on the tour as it reached the wonderfully atmospheric setting of London’s Union Chapel and the rather more faded but similarly elegant charm of Saltaire’s Victoria Hall.

With the original idea being to perform a twenty-one song set - something on which Eliza remarked at the time about how long it would take; catch the moment about forty minutes in - it was still actually quite a lengthy set from which the footage and accompanying CD is culled. The best of the best is essentially what this souvenir becomes, having already cherry picked from an extensive (and at times wayward) back catalogue.

The familiar Gallant Hussar opens proceedings, having become a bit of a party piece on the tour from sound checks to tour buses, taking on the mantle of being the ’tour song’. The impact of the expanded band is immediate with the brass lifting the song from its somber beginning. In fact, a couple of tunes in and you might even be thinking that the Wayward Band are the natural successors to the mantle of folk’s number one big band given the impending closure of the Bellowhead factory…

Moments veer from the celebratory in the show-stopping Good Morning Mr Walker, all calypso and riddled with blasts of brass which provides perhaps the party piece of the set, to the total contrast of the preceding Child Among The Weeds from the Bright Phoebus album - a song and performance which admirably pays due reverence to the legendary work. Add to that a lovely delicate intro to Adieu Adieu before the brass again gives the tune a shot of energy and Great Grey Back, a nautical tale yet verging on music hall, and the selection provides a short but sweet memento.

From a filming point of view, the action is presented mainly from static long shots and mid-range shots edited with some close up moments. Eliza takes centre stage flanked by Jim and her first lieutenant and long time buddy Saul Rose, while some wider angles allow poor old Sam Sweeney to briefly emerge from the shadows at stage right. The audience remain very respectfully seated and even after the band give it their all on Cobbler’s Hornpipe, a polite round of applause suffices.

The footage from London is noticeably darker, not really reflecting the atmosphere or magnificence of the venue, although on Cold, Wet And Rainy Night, it does capture Eliza looking and sounding so much like her mum, Norma.

There are a few unusual/original examples of cinematography - the slow zoom towards Eliza’s shuffling dancing and board-shoed feet at the start of Mr Walker is interesting, yet followed by a delightful moment catching the grin and little wave at the start of the chorus.

Don’t expect a super hi definition experience or an audio tour de force, although the mix is nice and full and bassy as you’d hope for from such a big outfit. What it does do though is captures Eliza Carthy fully absorbed in her art and going through the full gamut of shimmying, swaying and general jiving, as the kingpin of a vast and impressive band.