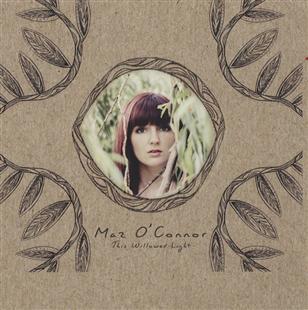 This Willowed Light is the stunning new album from Maz O’Connor. Having already made quite a name for herself on the folk scene through her BBC Radio 2 Folk Award nomination (2013) and successful previous releases, the singer songwriter is back with another album, bringing with her an exciting array of talent and an intelligent and sharp collection of material.

The album showcases Maz’s superb song writing skills whilst celebrating traditional songs as they take on unique arrangements and often original tunes. The result is eleven dazzling and fresh tracks which share a wealth of fascinating stories.

The story of such an infamous suffragette - Emily Wilding Davison - must be given a special mention. Commissioned by Broadstairs Folk Week, Derby Day is Maz’s interpretation of the 1913 Epsom Derby incident. It is atmospheric and thoroughly dramatic, capturing, through such effective lyrics and arrangement, the excitement, chaos and tragedy of the day.

Maz’s choice of themes gives the album an international feel, with additions such as Bird Song, collected by Cecil Sharp in the Appalachians and songs entitled Barcelona and Mississippi Woman. Nevertheless, each remains firmly rooted or indeed influenced by English music; in this respect Maz has a keen ear and eye for approaching tradition from alternative and inspiring angles.

Alongside Maz on vocals, guitar, harmonium and banjo we are treated to performances by Bethany Porter (cello), Rowan Rheingans (fiddle, banjo, bansitar and vocals), Matt Jones (guitar and mandolin), Matt Downer (bass), Nick Malcolm (trumpet) and Jim Moray (drums, rhodes piano, hammond organ, guitar and mandolin). Such variety gives each track a distinct sound while such established musicians ensure that the album as a whole is polished and beautifully arranged.

This Willowed Light strikes the perfect balance between calm and serenity and slightly more energetic, louder sounds when the collaborating musicians all spring into action - for example in Bold Undaunted Youth. Whereas Softly Softly (as the name would suggest) simply layers voices in harmony over a delicate pizzicato accompaniment. Such contrast, although not extreme, highlights the versatility and creativity of Maz as a musician and song writer.

This Willowed Light: an album which really does make you sit up and take note. With Maz’s exquisite vocals, gliding gracefully and flawlessly along with gorgeous melodies and arrangements it really is a must-listen.