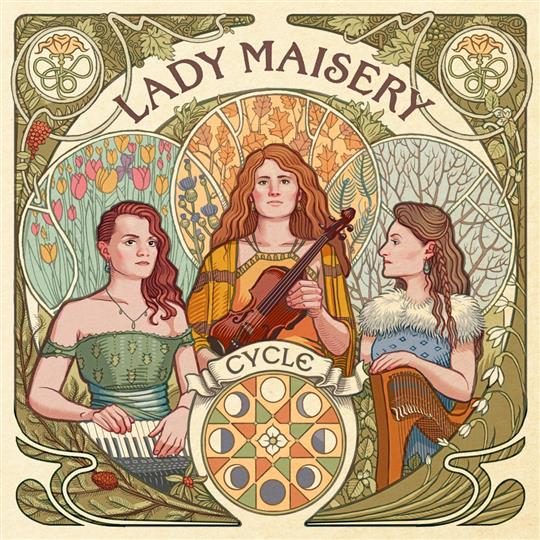 Lady Maisery’s 3rd album Cycle is, as with all of their work, full of glorious harmonies and songs of refreshing variety and depth, both accompanied and unaccompanied.

The trio’s signature tune-singing can take a while to grow on you. Its outing on the opening track Sing for the Morning is light and playful, but is also just a bit too bouncy. On the pair of tunes Bagpiper / Sheila’s 70 however they create a rich and soaring sound that the deceptive complexity of their tune-singing allows.

As ever, Lady Maisery are at their best when they embrace that uniquely folk brand of melancholia. Honest Work is, rather surprisingly, a cover of American rock musician Todd Rungren. It’s the lament of a working class man brought to ruin by not being able to find a job, pretty standard territory for a folk song. Despite Rungren’s rock roots (he produced Meatloaf’s Bat Out of Hell, among others) it’s actually a very faithful adaptation, not straying far from the original. It’s also right up Lady Maisery’s street, their mournful vocals spinning an evocative tale of woe.

On the other side of that coin is the 17th century protest song Diggers’ song, written Gerrard Winstanley, one of the founders of the ’True Levellers’, a group of proto-socialists. Lady Maisery have never shied away from politics, and their rousing call to proverbial arms is as relevant today as it was 350 years ago.

Spread throughout the album is a three-part collection, Seasons 1, 2 & 3, representing Spring, Autumn and Winter respectively. Each one is based on words taken from elsewhere (Season 1 a hymn, Season 2 a broadside, and season 3 a traditional song collected in Devon) put to music by one of the trio. Each song is a dedication to its respective season, and each captures the mood perfectly.

Cycle is both an album of significant musical depth and complexity, and eminent accessibility. Lady Maisery continue to be a vocal tour de force, as if there could ever be any doubt. It is perhaps not quite the equal of their previous release, Mayday, but it’s nevertheless a solid addition to their repertoire.

One final note: should you choose to buy the album, do take a moment to enjoy the intricate and rather charming art-nouveau artwork on the cover.

Released on RootBeat Records on 28 October 2016