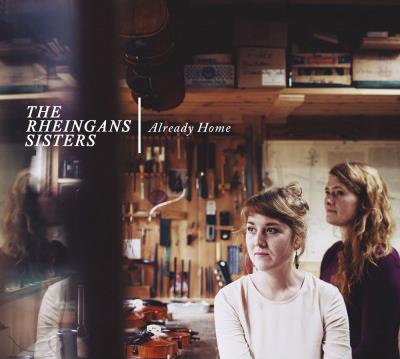 The Rheingans Sisters have found the time to record a second album - Rowan plays with both Lady Maisery and Nancy Kerr while Anna studies and plays music in the South of France. Whereas Gold Glad Hearts featured music from America and a handful of European countries, Already Home places the emphasis firmly on pieces from the French regions. The sisters make no claims about authenticity, preferring their interpretive collaborations to develop organically, allowing space for improvisation.

This new collection opens with a pair of violin dance tunes. Bourées came from Auvergne fiddle player Michel Pechadre and sees one instrument joining the pulsing beat to back the jaunty melody. The second piece, La Giatt du Coualhon finds the violins dancing around each other in a finely-timed interplay over sparse percussion.

Leon Peyrat was a peasant farmer and fiddler whose music lives on in collections. Wedding march Peyrat’s Cat is the first of his tunes to be explored here, paired seamlessly and appropriately with English hornpipe Our Cat has Kitted.

A trio of new compositions starts with the solemn song Mackerel, inspired by a tragic event that occurred while Rowan was visiting a Norwegian island. Anna’s Slängpolska pour une Auvergnate lifts the mood as she demonstrates the fresh energy from her newly-repaired fiddle over rattling banjo and percussion, before Rowan continues the lighter atmosphere with melodic whirl through the hay Dancing in the Cow Shed.

Adieu Privas is another interpretation of Leon Peyrat, discovered by Anna and sung in its native language. It segues into the traditional lively dance Bourrée, also from Peyrat’s rich repertoire.

As with Gold Glad Hearts, violins dominate, but the pair’s other skills are not overlooked. Although the banjo is far from common in South Western France, Banjo Branle transforms a traditional tune into an intriguing new version.

Elsewhere is Rowan’s unique banjo/sitar hybrid bansitar: developed by the sisters’ craftsman father Helmut, it would be almost criminal to omit this beautiful instrument. Anna’s twanging jaw harp lends a comedic feel to the playful Rainy Day Polska; with dripping percussion and a cheery refrain, this version of Steve Turner’s piece will brighten any wet, dreary day.

The album approaches its close with Rowan’s gorgeous song about the desire to dance, Keep the Whole Thing Turning, before being wound down nicely by Steve’s accordion take on Swedish fiddler Eva Saether’s Fastän.

The Rheingans Sisters’ Already Home is a fascinating set of dances, wedding marches and songs, held together perfectly by their ability to effortlessly anticipate and react to each other’s playing during familiar passages and improvisations alike.