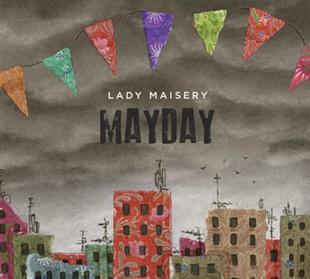 Lady Maisery are literally stomping their way back onto the scene this summer with their latest album, Mayday. This bold new offering features an entrancing blend of vocal harmonies, matched with all manner of instrumental delights and topped off (of course) with a heartbeat of foot percussion.

The band, formed in 2011, is a trio of well-known faces comprising of Hannah James, Hazel Askew and Rowan Rheingans. Mayday is their second album, following on from the BBC Radio 2 Folk Award nominated Weave and Spin. The group is perhaps best known for showcasing their outstanding command of vocal harmony, and this latest release is no exception.

What really makes the album stand out though is the selection of tales found within it. Mayday is a veritable storybook for the ears, from the nursery rhyme lyrics found in The Crow on the Cradle right through to the folklore of the sea which forms the backdrop for The Grey Selkie.

Don’t be fooled, however, as these are no light-hearted fairy tales. The themes which truly bind this album together are somewhat darker, as the band uses the medium of song to explore issues such as inequality, social injustice and indeed human struggle in all its forms.

In the aforementioned The Crow on the Cradle, for instance, the familiar nursery rhyme setting is contrasted sharply with chilling imagery of war. Meanwhile, Palaces of Gold is more starkly politically focused, and explores how class can divide the ways we lead our lives. Throughout the album, the power and unity of the group’s vocals really drive home the messages of each song.

The band also uses Mayday as a platform for the female voice. The Lady and the Blacksmith, a well-known tale of seduction, is given a feminist twist as the Lady this time fights back. Meanwhile, This Woman’s Work, a song by Kate Bush, was released as a charity single to celebrate International Women’s Day 2013, with all profits going to the End Violence Against Women Coalition.

Listeners who already know and love Lady Maisery will be pleased to find that the unusual brand of ’tune-singing’ for which they are known also makes a comeback on this album. With this trio around, even the tunes use voices as the main instruments, and this is shown brilliantly in Constant Billy/The Lie of the Land.

This is not to say that the band is limited to their vocal abilities, however. With this latest album, Lady Maisery show more than ever that their prowess extends beyond singing. Accordion, harp, banjo and fiddle are all played to perfection, as well as some ingenious percussive clog dancing, which is shown at its best in the onomatopoeic The Factory Girl.

Overall, this bold and eclectic second album shows that Lady Maisery are about more than just vocal harmonies. Uniting songs from across the ages, Mayday is an expression not just of stories but of the human condition.