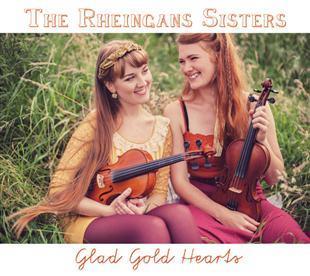 The Rheingans Sisters’ debut album Glad Gold Hearts is a jewel. Rowan Rheingans, known for her role in the vocal trio Lady Maisery, and her sister Anna both play fiddle as well as a range of other instruments including banjo, concertina, cello and the unusual bansitar (a cross between a banjo and a sitar).

And, of course, the two girls sing, and they do that very well indeed.

The skill both players bring to their music is evident in their decision to record live, showing a confidence and flair in the way they approach the occasion.

The Rheingans Sisters present the breadth of their musical repertoire in this selection of tunes from Eastern Europe, Sweden and Norway, as well as songs from England and the USA, even including old-time music.

The album opens with a rousing song, Sorry the Day, which is about the perils of marriage and giving up independence. This song, from a collection put together in the 1980s, is fitting to showcase both Rowan’s and Anna’s singing and their fiddle-playing abilities. Thematically it also makes a bold statement at the outset that these are two young independent women making their mark on life. The song works well with an Estonian flat-footed waltz and so sets the stage for an eclectic mix of traditions to follow.

Musically, there is a huge contrast on the album as another song, October Song, is much more modern in its feel. The girls learned it from their father and it is their adaptation of a song by Robin Williamson of The Incredible String Band.

Then there is The Factory Girl, a Pete Seeger song sung with a Southern feel to it, and paired with old-time tune Shenandoah Falls.

Bread and Roses is a modern song written by Rowan to support a poem by James Oppenheim, strongly linked with the women’s textile strike of 1912 in Massachusetts. Once more, the theme of solidarity with strong women, letting their voices be heard, comes through.

When it comes to tunes, Rowan and Anna show an ability to connect and mix tunes from different times and cultures. For example, I’m not Fed Up with the Pacific Ocean, a newly-written Swedish tune, is paired with a traditional American tune called Scotland, a pleasing mix of sound and titles.

There are modern tunes by Swedish friends, including tunes that capture the ambience of summer on long, light Swedish nights. There are also English tunes. Blenheim House and Grimstock feature English bagpipes and clarinet played by John-Francis Goodacre and Jo Veal.

Glad Gold Hearts ends with Reiselatt Fra Nes, a traditional Norwegian Hardanger fiddle tune which has a resonance and gravitas suitable for a finale. The Rheingans Sisters lend their voices to create a diddling conclusion, where voice and instrument merge into a sonorous whole. This is the jewel in the crown.