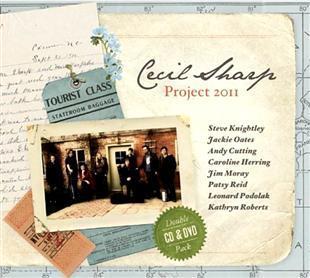 Following on from their March concerts, and their fabulous performance at Shrewsbury Folk Festival, the Cecil Sharp Project release their eponymous album, charting their many different takes and strands on the work of Cecil Sharp.

BrightYoungFolk were lucky enough to visit the house whilst Steve Knightley, Jackie Oates, Andy Cutting, Caroline Herring, Jim Moray, Patsy Reid, Leonard Podolak and Kathryn Roberts were holed up creating this material, and it is great to now have it available as an album.

The collection of songs and tunes is a very mixed bunch, as befits the variety of artists involved, and indeed Sharp’s volume of collected material. There is also a division between traditional items with a connection to Sharp, and new compositions inspired by his travels, his diaries, and his relationships and habits.

Having the DVD to accompany the album is an excellent addition. Many of the tracks include multiple singers, and a whole host of instruments, so seeing visually who does what is quite enlightening.

Reading the liner notes it is clear how collaborative this project was, and it is great to see and hear the performers all having equal footing across the album.

There are a number of varied highlights, in fact too many to mention in full! The beautiful harmony singing of Jackie Oates, Kathryn Roberts and Caroline Herring is vibrant throughout the album. Leonard Podolak brings a strong Appalachian edge, and not a little comedy, particularly in Veggie in the Holler.

Jim Moray also finds a humorous edge with Dear Kimber, detailing morris dance rivalry! However, nothing quite compares to Maud and Cecil, the final track of the album. As the liner notes say, this began life as a piece of drunken amusement, but evolved instead into the fictional suggestions of a relationship between Sharp and his assistant Maud Karpeles. The constant refrain of "Maud, yes Cecil" has to be heard to be believed.

Steve Knightley takes lead vocals on two striking tracks. The album opens with Mining for Songs, a simple, beautiful track that almost seems to be a manifesto for Sharp’s travels in America. Even more beautiful though, is The Ghost of Song, the absolute stand out track of the album and DVD. Caroline Herring’s reciting of the names of the people Sharp collected from is incredibly moving, whilst the rest of the group provide a gentle, drifting melody.

This is a complex album, with so many performers and musical ideas, but the Sharp theme hangs everything together, providing a wonderfully varied and accomplished result. It seems a shame that this particular group of musicians are unlikely to collaborate again.