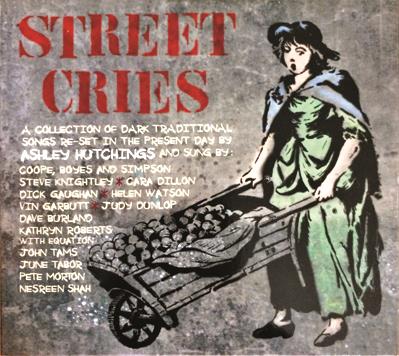 Folk songs are nothing if not malleable beasts. The best have survived for at least a couple of hundred years if not more. Words have been changed, tunes altered and yet a kernel of truth still remains that speaks directly to us across the centuries.

All of which is to say that the, welcome, re-release of Ashley Hutchings’ Street Cries sits firmly in the tradition of folk song evolution than, at first glance, one might expect.

In 2001 Hutchings took twelve traditional songs and re-worked them to be more understandable to modern audiences. Rather than record them himself, he chose specific artists for each track who interpret each song in their own style. The result is a diverse album which, sixteen years on, gives us a fascinating overview of one aspect of the folk scene in the early 2000’s.

For this re-release, Hutchings has provided the titles and lyrics of the traditional versions in a new booklet, making it easy to see how far or how close he has hewed to the original intent of the song.

Other successes include He’s Young But He’s Growing (My Bonny Boy) which gives a reason for the bonny boy’s early death - drug addiction - which makes sense of the line, ’he was the palest of them all.’ The song is sensitively sung by Cara Dillon with backing by the Lakeman brothers.

It seems appropriate that Mancunian Helen Watson should sing Salford Girls (Come all you Virginia Girls). This bluesy, jazzy piece is sung with sass by Watson who also contributes a mean harmonica solo.

Steve Knightly channels his inner Richard Thompson for a song about the habitual criminal, Endless Pages (Bold Poachers). Props to Hutchings for still managing to include a reference to transportation.

Arguably, the two highlights of the set are the disturbing The Shape of a Girl (The Foggy Dew) sung by Dave Burland and the sublime These Cold Lips (All Things are Quite Silent) performed by June Tabor and Mark Emerson. The latter piece would be at home on any Tabor album, in her and Emerson’s hands folk song becomes art song.

Street Cries is one of Ashley Hutchings’ favourite albums. It’s not hard to see why. This is highly recommended not only for fans of the artists represented but for those who appreciate good songwriting no matter what the genre.