Fairport Convention - What We Did On Our Saturday 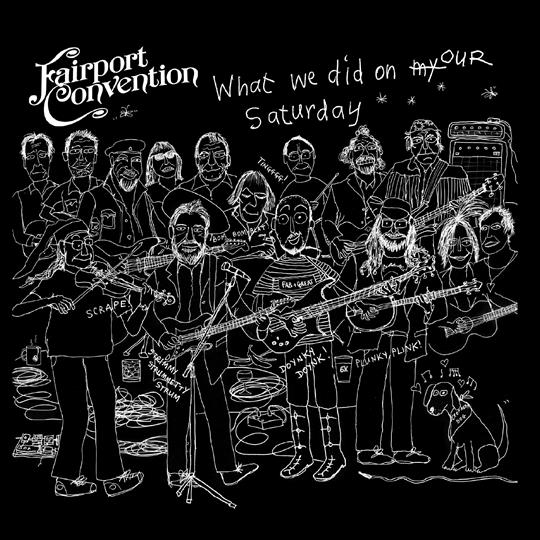 What We Did On Our Saturday proves without a doubt that, more than fifty years after their story began, Fairport Convention are still at the forefront of the British folk scene. This double live album was recorded at the band’s own festival, Cropredy, in the summer of 2017, and features the band’s current line-up alongside a glittering array of star guests. Featuring songs from throughout their astonishing history, it is a tour-de-force and shows that Fairport have lost none of their quality over the last five decades.

Perhaps the biggest name to guest on this recording is Richard Thompson, who of course was a vital member of the band in their early period. His guitar work, which is unbelievably dextrous as always, shines brightly on all the tracks where he is featured, and his compositions, such as Now Be Thankful and Farewell, Farewell, are among the brightest points of the album.

One former member who of course could not join the band was Sandy Denny, whose absence has been keenly felt in Fairport’s music since her premature death in 1978. Her ethereal, shimmering voice on iconic early Fairport albums such as Liege & Lief seems almost inimitable, but the superb Chris While comes exceptionally close when standing in for Denny on songs from this era. While’s performances of classics such as The Deserter, Rising for the Moon, and Who Knows Where the Time Goes are spine-tinglingly gorgeous, and a definite highlight.

Another fine guest is Ralph McTell, a legendary performer whose career stretches back as far, if not further, as Fairport themselves. He sings with the band on White Dress, which he co-wrote with Fairport’s legendary late fiddler Dave Swarbrick for the album Rising for the Moon in 1975. This is yet another brilliant performance on an album which has very few disappointing moments.

If there is a weakness in the album, it is the cover songs. Richard Farina’s Reno Nevada and Leonard Cohen’s Suzanne seem to lack a little of the sparkle which permeates the songs which Fairport themselves made famous. The high mood is soon restored after these though, with Farewell, Farewell and Crazy Man Michael both showcasing Fairport at their absolute best.

The album’s entire cast of stars return to the stage for the final number. A fantastic performance of Thompson’s anthemic Meet on the Ledge, with the audience also in fine voice making themselves heard, is a great end to this superb live album. What We Did On Our Saturday captures the essence of Fairport Convention, which has made them so successful for so many years, but also shows they are certainly not a spent force yet.