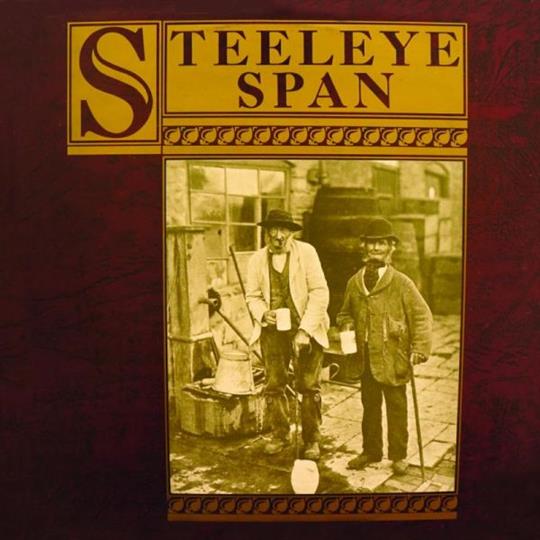 Ten Man Mop was the second album Steeleye Span released in 1971 so it is fitting that Talking Elephant have seen fit to reissue both albums at the same time.

The electric folk sound first hinted at in Please to See the King is developing further here and that distinctive punchy sound which was to become Steeleye’s trademark is in evidence from the first track. Gower Wassail sees Tim Hart opening the album in festive mood with glorious a capella harmonies in the chorus.

Peter Knight’s penchant for Irish tunes is very much in evidence in the jigs Paddy Clancey’s Jig/ Willie Clancey’s Fancy and the reels Dowd’s Favourite/£10 Float/The Morning Dew. This marks the first time the band had used electric instruments for dance tunes.

Keeping up the lively mood of the dance tunes, Four Nights Drunk has the voice and fiddle working together very fast telling a tale of a woman trying to convince her husband he is seeing things because he is drunk, when in fact she has another man in the house with her.

The mood changes from frivolity to tragedy with When I Was on Horseback in which Maddy Prior takes the lead. The song is a mournful account of a young man’s downfall and subsequent death from syphilis. Soldiers carry roses to mask the smell from the deceased. It serves as a warning to others not to suffer the same fate.

Prior takes the lead on two other dramatic songs, Captain Coulson and Wee Weaver. The former has the unusual addition of organ, played by Tim Hart, while the latter is particularly striking as voice and fiddle work closely together.

This edition includes some bonus tracks - a fine version of the shanty General Taylor led by Tim Hart, and (rather strangely) three versions of Rave On.

It is interesting to hear how a band’s sound originated, especially as Steeleye Span is very much alive and kicking. Nostalgia for the old fans and a look back at the roots of the sound for the new ones.

Originally released in 1971. Reissued on Talking Elephant on 26th February 2016.