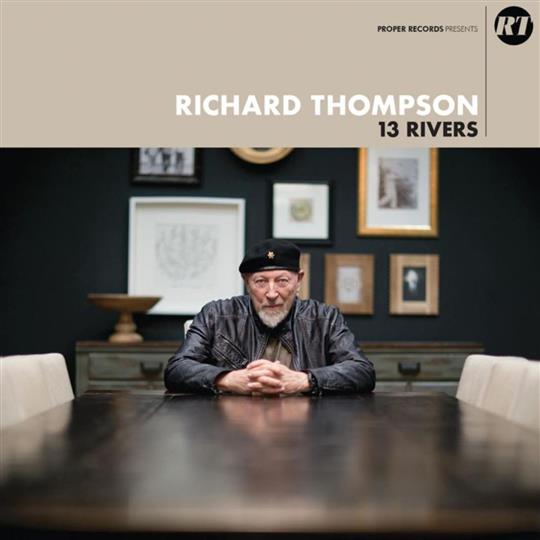 Released a matter of months before his 70th birthday, 13 Rivers sees Richard Thompson in fine form.

Recorded in California, the album sticks to the polished West Coast rock sound of much of the feted songwriter’s output over the last two decades. But the glossy presentation belies the idiosyncratic nature of the material, from the disarming chord changes on The Storm Won’t Come, to the baroque embellishments of Trying.

13 Rivers certainly runs the gamut of emotions. Do All These Tears Belong to You? moves from desperation to euphoria in the space of a single song, while My Rock, My Rope is part torch song, part cry for help, wrapped in a gorgeous gospel-tinged package.

But, while many songwriters in their later years have a habit of retreating into bland contentment and magnanimity, Thompson retains a steely edge in both writing and delivery. The snarl with which he sings on You Can’t Reach Me of being born alienated, or the tetchy psychobilly of The Flesh of Gilead are signs of an inner angst that’s been the undercurrent of his solo career.

On the instrumental side, there’s plenty of evidence of Thompson’s ability to take a theme, elaborate on it, and then end up at loggerheads with the original tune, with a melodic vision to match the best jazz musicians. If anything, the relative brevity of the solos here will frustrate those who’ve seen him and his guitar engaging in minutes-long arguments with his own compositions on stage.

13 Rivers even manages to sneak in a tacit nod or two to Thompson’s folk background, with the breezy mandolins of O Cinderella. Meanwhile The Rattle Within sounds like a minor key Scottish pipe march set to words and transported to the Deep South.

With a set of characteristically well crafted songs, 13 Rivers will likely delight the large numbers of diehard Richard Thompson fans out there. From the rest, as a minimum it deserves praise for the man’s ability to keep making worthy additions to his already considerable back catalogue, year after year.

Released on CD, download and vinyl on Proper Records on September 14th 2018. Produced by Richard Thompson