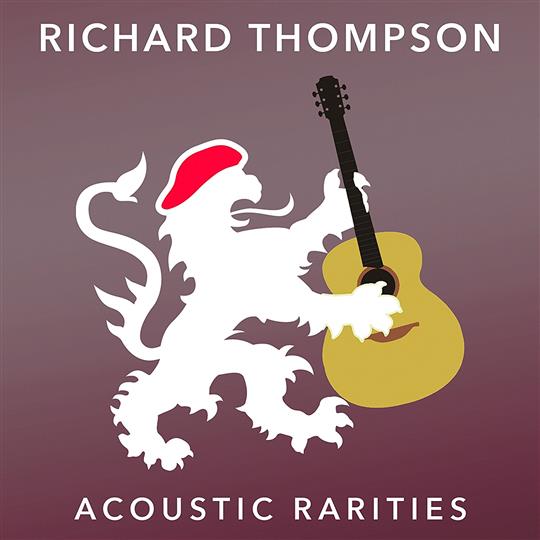 Acoustic Rarities is something of an enjoyable oddity of an album from Richard Thompson. It’s a collection of old songs that he’s not previously released (at least not as a solo artist), all newly recorded.

As such, it runs the gamut of Thompson’s career, from Fairport Convention and through his later years. It’s interesting to track how Thompson’s sound has changed and developed over the years as you listen, and to try and place the compositions into the era in which they were written.

Sloth, originally featured on Fairport’s 1970 album Full House, has the same airy wistfulness you hear in the opening to Meet on the Ledge or Who Knows Where the Time Goes. On the other hand, the frenetic Push & Shove would not be out of place on 1999’s Mock Tudor.

To some degree this is a double edged sword. If you’re a Thompson fan and you want more of anything and everything he’s done Acoustic Rarities will do that with a healthy variety of songs. If you only like Thompson’s Fairport writing, or you only like his more recent releases, you may find it more of a mixed bag.

The stripped back nature of the album does go some way towards bringing the contrasting styles of Thompson’s career together, smoothing some of the harsh edges of his later work whilst also giving the older stuff a bit more of a contemporary feel.

There are a couple of occasions where some more instrumentation would have been welcome - primarily They Tore the Hippodrome Down, which paints a desolate picture of urban decay. It builds to an oppressive climax but lacks the weight to completely seal the deal.

It goes without saying, but Thompson’s performance is excellent, his guitar playing is as deft and delicate as ever, and his earthy vocals continue to entrance.

There are two songs which stand out as rarities amongst the rarities. I Must Have a March is a wonderfully descriptive tale of a burlesque performer, with a dark cabaret feel. It’s a vivid reminder that Richard Thompson is a prodigious songwriter as well as guitarist.

Alexander Graham-Bell sings the praises and many accomplishments of the eponymous inventor accompanied by Reinhardt-esque jazz guitar. It honestly sounds like it should be on CBBC’s Horrible Histories (which, for those who are unaware, is the highest of praises). The lyrics are witty; at one point it even sounds like Thompson’s trying to stifle a laugh, but the real highlight is the sumptuous guitar playing.

Acoustic Rarities is great music in the grand scheme of things, but it’s not a revelation as far as Richard Thompson is concerned. It’s to be recommended, particularly for Richard Thompson fans, but if you’re new to his music the recent Acoustic Classics albums may be a better place to begin.