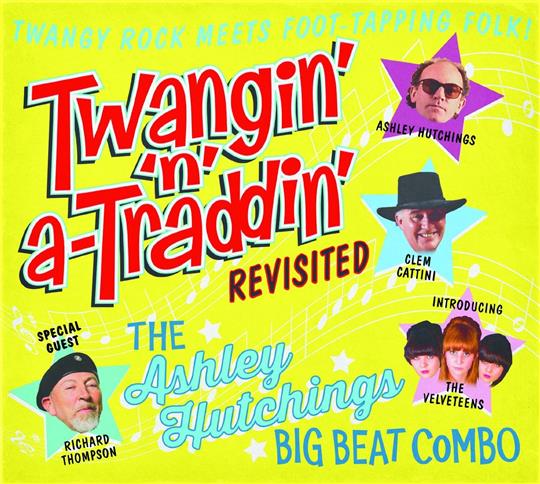 Twangin’ ’n’ a-Traddin’ Revisited is a celebration of the music that first captured Ashley Hutchings’ imagination. Not English folk but rather the instrumentals of the pre-Beatles era from the likes of The Shadows, The Tornadoes and Duane Eddy.

Hutchings has reissued the album, originally released in 1994, and added three new tracks in what he hopes will lead to a reappraisal of what he calls this “misunderstood and undervalued work.”

Officially credited to The Ashley Hutchings Big Beat Combo, the juxtaposition of musical styles is evident, not only in the choice of material, but in the cast of supporting musicians too. Joining Hutchings are Simon Nicol, Simon Care and Richard Thompson from the folk rock world, but also original Tornadoes drummer and legendary session man, Clem Cattini, along with Georgie Flame and the Blue Flames guitarist, Colin Green.

It’s certainly not going to appeal to every folkie but, this being Ashley Hutchings, the folk influence is never that far away. The Tornadoes’ Telstar is radically reimagined as a gentle traditional-flavoured somewhat pastoral tune, with Simon Care on melodeon and Richard Thompson on penny whistle. In a nod to the heritage of the original, though, Clem Cattini, again takes up the drum kit, just as he did when it was a number 1 hit for the Tornadoes back in 1962.

Versions of other classic instrumentals of the era, such as F.B.I. by the Shadows and Walk Don’t Run by the Ventures, whilst staying more faithful to the originals, are still fascinating to hear because of the choice of instrumentation and unexpected mix of musical sounds.

Meanwhile, other tracks like Horsin’ Around and Spinnin’ Jenny/Soldiers’ Spree are traditional tunes that have been given the drum patterns and instantly recognisable twanging guitar sounds of one of those early ’60s instrumentals. Think Hank Marvin giving a helping hand at a morris gig…

Besides the 1960s cover versions and the traditional tunes there are also a number of self-penned tracks from Hutchings himself, which again draw on both folk influences and the rock ’n’ roll instrumentals of the era.

This is not a simple reissue, however, and three new songs have been added to what was originally an album of instrumentals. Two of these have vocals from the Velveteens, a young female singing trio whose vocal delivery along with the evocative period lyrics perfectly capture teenagerdom in late ’50s/early ’60s Britain. The third of the new recordings, and the final track of the album, is Welcome to The World, Hutchings’ very personal reflection on growing up in that era.

For those wanting an introduction to Ashley Hutchings’ considerable back catalogue, this is certainly not the album to start with. Unlike some of Hutchings’ most notable output, it’s always going to be an interesting curiosity rather than a genre-defining classic. But a re-release is long overdue. It’s simply fascinating to hear the sounds that first inspired the teenage Hutchings to want to be a professional musician, melded with the folk influences that have been the mainstay of his long and celebrated career.