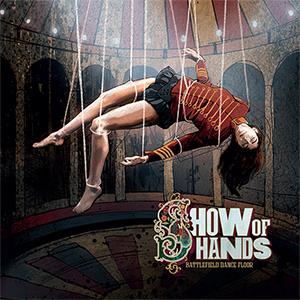 Originally formed by Steve Knightley and Phil Beer in 1986, becoming a trio with double bassist Miranda Sykes in 2004, the release of Show of Hands’ 18th studio album now finds them a quartet with percussionist Cormac Byrne, and Matt Clifford guesting on keys.

Featuring eight new Knightley songs, Battlefield Dance Floor is a musically wide-ranging affair that embraces both whimsy and political punch, the former encapsulated by Dreckley, featuring the vocals of the Bridge Hill Shanty Men. A dash of Cornish reggae wherein a budding Home Counties relationship is threatened by the lure of the West Country (the title’s the local pronunciation of directly) and such temptations as pasties, Poldark, and Fishermen’s Friends, though the real crunch is what goes on a scone first, jam or cream. Likewise, the album closer, the breezy No Secrets, a skeleton in the closets memo distilled from stag dinner advice to an impending bridegroom.

Turning to more serious fare, Knightley on mandocello kicks things off with Lost, a rhythmically puttering number inspired by ill-fated British sailor Donald Crowhurst that digs into a wider theme of masculine despair, while the Middle-Eastern coloured Mother Tongue addresses homeland and displacement, co-penned with Johnny Kalsi and featuring the chanting of British-Asian Shahid Khan. Kalsi’s influence also spreads to the bhangra meets Morris of the title track, a jaunty little number set variously on the eve of Agincourt, the Spanish Armada, Waterloo and D-Day as the men down a few and jig around before the following morning’s slaughter.

Given the current political turmoil, the mid-tempo march beat You’ll Get By is a timely anthem celebrating the resilience of the older generation who have lived through harder times, and that we will too. Relationships naturally have their place; Just Enough To Lose is a poignant piano-backed ballad that uses a failed harvest as a metaphor for a life built together falling apart, but finding a note of optimism in the refrain “if I had to choose/ I’d settle in the end…for just enough to lose.”

Of the remaining two originals, Sykes takes an all too rare lead vocal on the fiddle-led Make The Right Noises, a lovely tumbling melody set to cynical lyrics about faking concern. Built on a martial beat and chorus, Knightley wrote Swift and Bold (Celer et Audax) for a concert in honour of 6 Rifles, the reserve Infantry Battalion of the South West and West, the title the translation of the motto bestowed on their forerunners, the Royal Green Jackets, by General Wolfe.

Which leaves four covers, first up being Forfarshire, Kirsty Merryn’s heroic tale of Thomas and Grace Darling for which he provided vocals on her album and which also features Gerry Diver, who produced it, on everything but cuatro.

Following this is Knightley on tenor guitar for another dip into the past for Adrian Mannering’s My True Love, a rare folk world example of a girl being happily reunited with her soldier sweetheart, a song they’ve known since their twenties but have only recently begun playing, and thankfully recorded too.

Painted in both broad brushstrokes and delicate finesses, from its striking cover to its last note, this album is one of the year’s best.

Released September 27 on CD, vinyl and digital on Proper Music. Recorded and produced in 2019 by Mark Tucker and Steve Knightley at the Greenroom, Honiton.