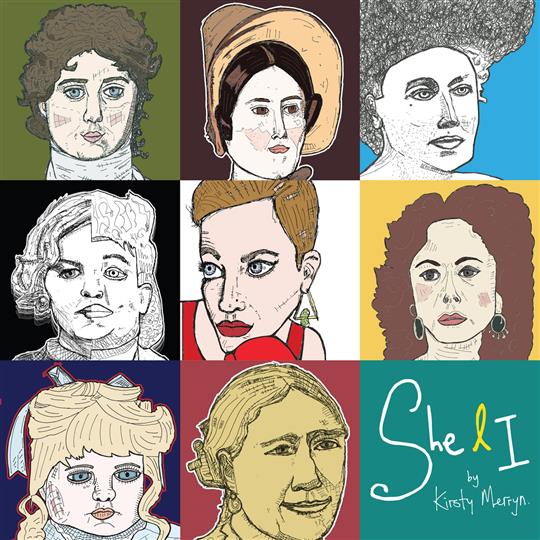 Songs about historical and heroic figures, both real and apocryphal, have for a long time been a staple of the English folk tradition. Kirsty Merryn picks up this thread with her debut album, She & I.

Telling the story of seven women (and one great-great grandad) from throughout history, this set of all-original material by singer and pianist Merryn offers a different angle on an old format. Rather than a strict narrative account of their remarkable lives, the songs instead reflect in a broader way on the preoccupations of the protagonists.

For instance, the brooding Forfarshire portrays the apprehension felt by celebrated lighthouse keeping father and daughter duo Grace and William Darling, the latter voiced by Show of Hands’ Steve Knightley. Then there’s Delilah and Samson, with Luke Jackson lending his impressive vocal range for the part of the emasculated strongman; Merryn’s composition bringing out his anguish and vulnerability perfectly.

That ability to craft a strong melody is also on show in the gospel-tinged Bring up the Bodies, which has a full-bodied feel in spite of consisting simply of vocals over a shambling drum beat. Meanwhile, An Evening at Home in Spiritual Seance begins as a gorgeous psalm-like entreaty (to the Angel Gabriel, no less), before opening up into trance-like vistas.

While the material on She & I is interesting in itself, the album is hugely enhanced by Merryn’s collaboration with producer Gerry Diver, whose name on an album sleeve is a guarantee of interesting embellishments to his charge’s work. For instance, the otherwise prim and delicate The Fair Tea Maker of Edgware Row takes on a charmingly eccentric bent thanks to a wobbly zither-like sound in the breaks, while Queen of the Mist is awash with phasey electric guitar.

However, all the bells and whistles added in the studio will generally fall flat if the song and singer aren’t worth listening to in the first place. Luckily, Merryn’s original approach to finding lyrical inspiration and unaffected, but not artless, style leave little to worry about in that respect, as she uses her own voice to amplify those of the women who went before her.

Released November 2017 on CD and download. Produced by Gerry Diver.

1. The Pit and the Pugilist
2. Bring up the Bodies
3. The Fair Tea Maker of Edgware Row
4. Forfarshire
5. An Evening at Home in Spiritual Seance
6. Queen of the Mist
7. Delilah and Samson
8. The Birds are Drunk