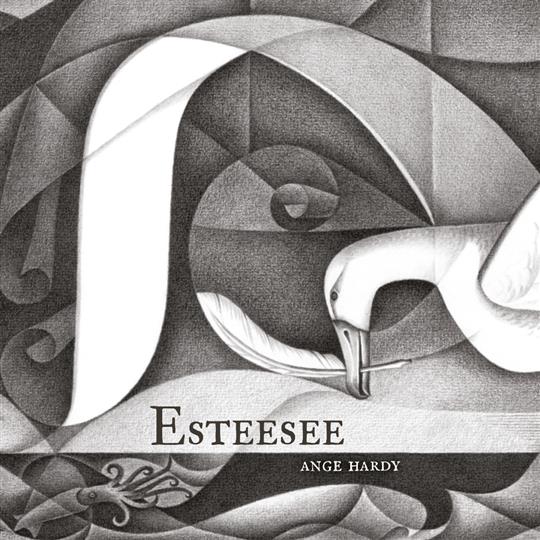 How often do music reviews reference TV’s Great British Bake Off (or Cake Off as it’s known in our house)? Inspired by Paul Hollywood’s particular brand of plain speaking and brutally frank feedback to the show’s victims/contestants, when it comes to Esteesee it’s so very tempting to quote Paul and say “I don’t like it.” Then, wait a few moments with that teasing look on the face before adding “I love it.”

Almost exactly a year on from the Bright Young Folk review of Lament Of The Black Sheep Ange returns with a project and album, part-funded by the National Lottery through the Arts Council England.

Anyone fortunate enough to have received a pre-release bundle would have seen it appear in the form of a bespoke package which was more than worth the time and patience it must have taken to put together. Along with the actual album, including an acknowledgement in the album credits for pledgers to the album, came all manner of Esteesee-related goodies along with Ange’s personal thanks and of course a plug for the short tour which will see the album come to life in venues along the Coleridge Way (more of which later). Even the mailing envelope is a work of art and there will be those who didn’t want to play but simply look at it.

Unlike some, the folk tradition isn’t steeped in Ange’s blood. She has come to the folk party only reasonably recently, although with several acclaimed releases now behind her, and as such her unprejudiced yet committed vision of what she sees as folk music brings an invigorating freshness to the genre. She’s joined on this album by various collaborators, adding some deft touches to her own musicianship, including Show Of Hands’ Steve Knightley, Patsy Reid on fiddles, cello and viola, Lukas Drinkwater on double bass and local buddy Steve Pledger to name a few. A few spoken word passages from David Milton and Tamsin Rosewell add to the variety of the material.

Written, arranged and produced by Ange, it’s Drinkwater and Reid who bring some considerable musical weight to the material adding splashes of colour and depth, but it’s Ange Hardy through and through. Within 15 seconds of the opening you’ll recognise those faraway vocal loops and what is gradually becoming the familiar Hardy voice. Like a pink stick of minty Blackpool rock, this has Ange Hardy stamped all the way through.

In advance of the release Ange has also premiered some of the songs live and there’s been a radio treasure hunt campaign where you can catch each of the songs on local independent radio shows. The opening track, The Foster-Mother’s Tale, is one of those which fans at recent gigs will have heard, and from that lyrically harsh and bleak beginning, all the way through to Elegy For Coleridge, a triumphant closure based on aspects of the poet’s self-penned epitaph, it’s an enthralling journey, relatively progressive in its concept as the labours of the romantic poet and Ange’s musical vision become one.

Obviously there’s the Coleridge thread running through the songs, yet each stands alone with its own story to reveal. Some might scoff under the false belief that the words were essentially in place yet it’s far from the case as Ange has been able to unearth the treasures, form them into telling narratives and coat them in a musical dressing which showcases them in song. She has talked of weaving Coleridge’s words around her own and has similarly merged those words of his which resonate most deeply with her own life experience.

It’s difficult to review this album without spoiling the surprises and revealing too much about the songs, their origins and their journey to the musical form, all of which are detailed in the liner notes. In My Captain and William Frend you’d be pushed to hear a finer folk song this year. Try to listen just the once without pressing the repeat button. Oh - and add Friends Of Three to the list. All wonderful examples of the emotive effect that a simple tune and melody can have. The sweeping title track sees Ange at her most achingly emotive and pushing herself almost in desperation at the words - essentially a prayer in folk song.

There’s also the intriguing concept (and resulting song) Pantisocracy - one for the googlers - and Mother You Will Rue Me, where Steve Knightley takes up the words in the first person of a young Coleridge. Kubla Khan sits as a spoken word narrative of Coleridge’s classic words against a medieval/Eastern-sounding accompaniment enhanced by Kate Rouse’s hammered dulcimer. Maybe one on which the jury might be out a while - especially those with a wider rock taste who will inevitably have Canadian power trio Rush’s Xanadu brought to mind.

Ending with the company coming together in what Ange has called a “triumphant elegy” based around the elegy Coleridge actually wrote for himself, the real tribute comes in the penultimate track - Along The Coleridge Way - after long and careful consideration, perhaps the pick of several gems which are the cream of the album. Also a song which will be the perfect finale to the ’Along the Coleridge Way Tour’ which takes in series of gigs in early October.

There’s a clarity and confidence in the concept and execution in which Ange has brought the material to life, reinforcing her particular aptitude for blending a narrative into musical form. With Esteesee, Ange’s own brand of bare foot folk takes a massive leap forward.

Recorded at Beehive Studios. Development of this work supported by funding from the National Lottery through Arts Council England.