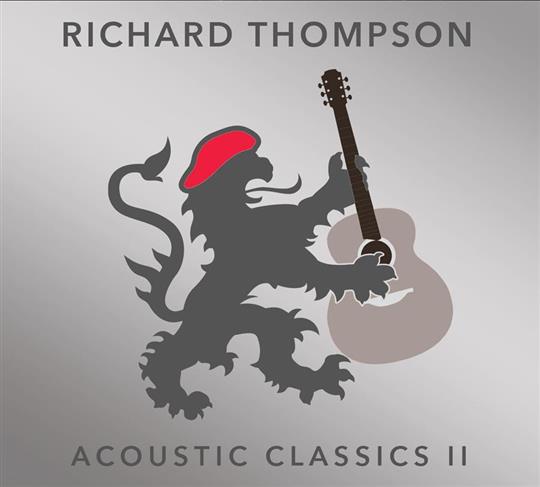 Acoustic Classics II presents us with the unadorned Richard Thompson. Here are fourteen songs stripped back to guitar and vocals.

What is so remarkable is how Thompson manages to make the listener forget they are listening to one man. His guitar work is so good that it becomes an orchestra with Thompson seemingly playing both melody and bass lines.

As for the songs, they span almost forty years, From Fairport’s What We Did on Our Holidays (1969) to Sweet Warrior (2007). Anybody new coming to Richard Thompson would find this album a pretty fair representation of his themes and concerns.

One criticism levelled at Thompson is that many of his songs seem to be about duplicitous, scheming, unfaithful women. Indeed, the album leads off with She Twists the Knife Again in which the singer has so many complaints against his partner that you wonder why he’s still with her. Thompson almost spits out the words, hurling invective at the cruelty of his lady.

Women don’t come off much better in Bathsheba Smiles and Why Must I Plead? They either play the part of the trickster or the deceiver. This may be problematic to some listeners but a lot can be forgiven when the songs are as well-crafted as these two undoubtedly are.

Thompson’s folk roots show in his story songs which are, arguably his best work. Guns are the Tongues tells of a man recruited to fight and die for an (unnamed) paramilitary group in an (unnamed) country. This is superb both lyrically and musically and benefits immensely from Thompson’s guitar work.

Equally impressive is Crazy Man Michael, an old Fairport Convention number, whose mysterious lyrics linger long in the mind after the song is over. Thompson’s lute-like guitar playing gives the the song a medieval quality.

Of course, the old warhorses are also present. There’s a melancholy quality to both Genesis Hall and Meet on the Ledge. The latter song, especially, showing that it can work outside of an extended festival singalong context.

Fans of Richard Thompson seem to fall into two camps. There are those who love his studio albums and band shows and those who much prefer his solo live work. The latter group relish the chance of hearing Thompson perform his songs without the aid of a safety net - just a man and his guitar. On the evidence of Acoustic Classics II it’s easy to understand why.

Released on 11 August 2017 on Beeswing Records.