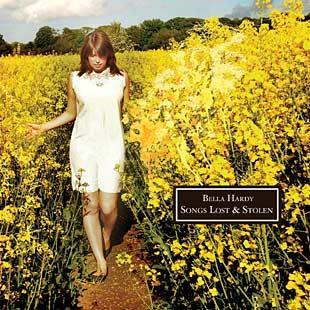 Songs Lost and Stolen marks a departure for Bella Hardy. Whereas her previous two albums have contained mainly traditional material with a few self-penned songs, this one consists entirely of original material.

Bella draws her inspiration from several sources, such as Greek mythology (Labyrinth) , fairy tales (Rosabel - a retelling of Beauty and the Beast) and more traditional subject matter (Herring Girl, Flowers of May).

The instrumentation on the album is varied, with Mattie Foulds (who also produced the album) of the Burns Unit on percussion, Lau’s Kris Drever on slide guitar, Anna Massie on guitar, Patsy Reid on fiddle, Su-a Lee on ’cello and musical saw (!), Corinna Hewat on harp and Chris Sherburn on concertina. Even with this wealth of musicians, the accompaniment is never overwhelming, allowing Bella’s vocals to take precedence.

One track which really stands out for me is Herring Girl - a story of a girl who aspires to join the girls gutting fish, and when she has the chance to join the team, does well and takes pride in her work. It is a song that deals with dignity in the face of hardship and injustice. With so many folk songs about the men fishing out at sea, it is a pleasing change to hear a song about the next stage of the process, and from a woman’s point of view.

A couple of tracks have a gentle bluesy/jazzy style - Walk it With You features Kris Drever on slide guitar and backing vocals. Promises has a freely moving vocal line with some lovely instrumental interludes.

While the overall feel of the album is rather gentle, some tracks are more up-beat. Written in Green in particular has a wonderfully funky bass-line, and reflecting the subject matter of looking forward to a new start.

This album is an excellent show-case for Bella’s talent as a song-writer and deserves multiple plays as there is more to be discovered at every listen.