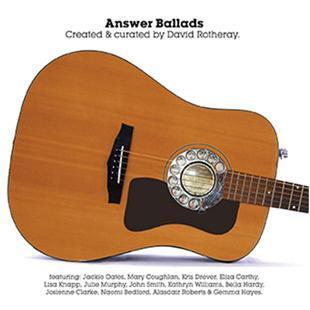 It’s rare that you come across a record as original as David Rotheray’s Answer Ballads.

In what is effectively a concept album, characters from 12 classic pop songs are each given their own voice by Rotheray, with brand new lyrics from their perspective. Finally, it’s time for Rod Stewart’s Maggie May and The Police’s Roxanne to give us their say, and this time, they’re doing it with folk! What’s more, a whole host of well-known folk artists are on hand to lend their voices to each song. Overall, this is a recipe for something very interesting.

For anyone unfamiliar with his name, David Rotheray was once a member of The Beautiful South, a band well known for their tongue-in-cheek lyrics. This tendency towards dry humour is continued in Answer Ballads, and despite the dismal backgrounds to some of the characters’ lives, the wit wins through.

Sylvia’s Song, for instance, tells the touching tale of a daughter growing apart from her mother. In anyone else’s hands, this could err towards the melancholy, but Rotheray’s Sylvia, performed by Bella Hardy, chirps out cheerfully, ’I’ve got a house and a car and a cat, and I don’t need you at all.’

With this being an album mixing melancholy lyrics and cheeky humour, it seems only natural that Eliza Carthy is involved! Her track, Maggie’s Song, is an ode to the title character from Maggie May. Unlike many of the other tracks, this one is unusual in that the tune was written by Rotheray and Carthy together, as Rotheray explains: ’I turned up with the lyrics, and Eliza and I bashed out a tune together, eye-to-eye over a guitar.’ Most of the other tracks involved Rotheray either writing solo, or penning the lyrics and asking someone else to write the tune, so perhaps this is why Maggie’s Song gels so well with the artist and has such a strong ’Eliza’ twist.

Another highlight of the album is Billy-Joe’s Song, performed by John Smith. It’s a trip to cowboy-ville wrapped up in a song, and Smith was the ideal choice to perform it, with his gravelly delivery matching the story to a tee.

Indeed, Rotheray went to great lengths to ensure that each character was paired carefully to the ideal voice to portray them. Gemma Hayes was selected for Pearl’s Song, for instance, as Rotheray was specifically looking for a singer with strong vocals but just the right hint of vulnerability in the delivery. In this respect, his experience with this album must have been a bit like casting the characters for a drama.

Overall, this is an album which will have appeal for a very wide range of listeners, from fans of the original pop songs to avid followers of each of the guest artists involved. What makes this project so interesting is that as well as each song being about a different character, each track has its own character in musical terms, and it is this rare quality which makes it such a compelling listen.