Mabon - Live At The Grand Pavilion 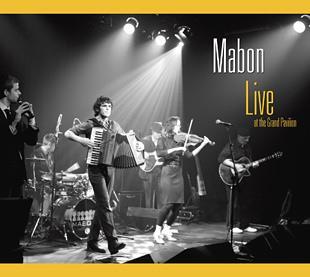 The name Mabon means “autumn equinox” and the current line-up contains five Welshmen and a Scot. They have been thrilling festival audiences and this CD with accompanying DVD aims to capture some of the magic of their live performances.

All but two of the tunes are composed by accordion player Jamie Smith. The titles of the tunes indicate many different influences from French to Eastern European to Welsh (of course). Some tunes show case Calum Stewart on wooden flute and whistles, or Oli Wilson-Dickson on fiddle, while in others the accordion is the driving force.

The majority of the tunes are played with an energy that is almost exhausting to listen to. Not all are played at break-neck speed though. Divers Alarums, for instance, is more mellow with a lovely flute solo. Mazurkas has a gentle jazzy feel, reminiscent of the playing style of Jethro Tull’s Ian Anderson.

Another track, Nikolai the dancing bear seems to tell a story, starting with a melancholy fiddle passage, which is then taken up by the accordion. Things obviously improve for Nikolai towards the end - is that the bear dancing?

The band obviously love playing live and this CD & DVD set is the next best thing to going to one of their gigs.