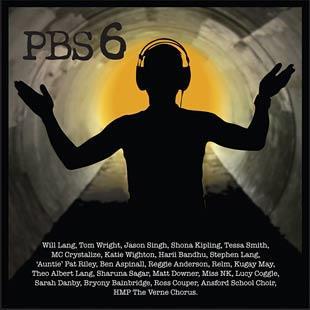 The culmination of a project bringing together artists from both sides of the globe, PBS6’s self-titled album arrives on the back of a big ambition to create music unbounded by genre or geography.

The album contains reworked versions of the Going Down EP alongside a raft of new material. Combining traditional folk songs with new compositions and samples from BBC Look North, interviews conducted in Australia and even the James I 1606 Act PBS6 examine culture, heritage and the sense of belonging.

The long list of collaborators involved in the album don’t share a common heritage or musical background, and this shines through in a positive manner, creating a sound respectful of the varying influences. Our Story encapsulates this, both musically, and in its lyrics concerned with ancestry.

One of the most striking tracks of PBS6 is Blind Fiddler. With possible origins in America this song has migrated through various singers across the Atlantic. Now Tom Wright provides an earthy rendition complete with looped samples and powerful percussion. Shona Kipling’s repeated accordion refrain provides a hook that draws the ear in.

The tune sets of the album allow a different side of PBS6 to come through, with more of the folk elements in evidence. Shona Kipling plays accordion in a very enticing manner, and Will Lang’s virtuosic bodhran playing is also allowed to come to the fore, particularly in Ainsley’s.

Bok Espok provides a moment of undiluted energy with a tune that could easily fill a dance floor whilst Shown in contrast creates a real moment of reflection on what is generally a frenetic, pacy album.

The gem though, is surely Moving On Song. Taken from Ewan MacColl and Peggy Seeger, the tale of life as a traveller seems a fitting conclusion to this album of diversity and emigration. It also includes choruses from both a school and a prison, that create an effect that is reminiscent of Pink Floyd’s The Wall mixed with Depeche Mode.

Difficult to imagine? Get the album to find out, you won’t regret it.

Released on 10 May 2010 by Victoria Tunnel Mushroom Company.