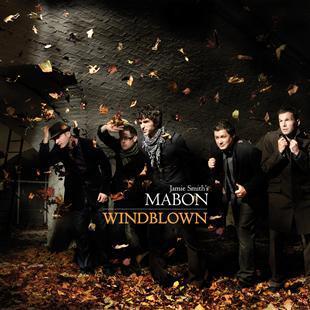 Windblown from Jamie Smith’s Mabon is an album largely of instrumental tracks squarely in the Celtic tradition. In their previous incarnation Mabon, the Welsh group built up a reputation as a strong live act and released the highly regarded live album Live at the Grand Pavilion in 2010. Their new line-up features Adam Rhodes on bouzouki. Windblown is full of pace and verve, particularly in Tunnag’s Tunes and The Gordano Ranter.

The intricate, multi-layered tunes played at breakneck speed are reminiscent of the work of Lau although with a distinctly Welsh theme. Jamie Smith’s accordion work is the clear highlight of the album and this is certainly a group of artists on the same wavelength and with a strong understanding of each other. The arrangements are tight, resulting in some great instrumentals, particularly the fast passed jigs and reels. A change of pace comes with the beautiful and delicate Gareth and Aoife’s .

The vocals on the album are in Welsh and English. Caro Pum Merch, sung in Welsh is powerful and moving, but the songs in English such as Yes We Sing Now are perhaps not quite as effective.