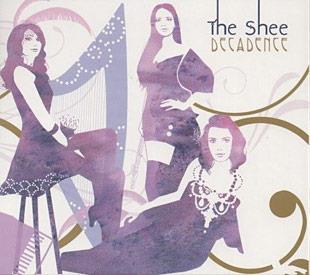 The Shee are an all-female band, who between them play flute, whistle, fiddle, electroharp, viola, mandolin and accordion. They met while studying on the Folk Music Degree at Newcastle University and come from different parts of the UK. This has resulted in a wide range of influences in the band’s music, including songs sung in Gaelic.

Many of the tracks are written by members of the band, which dovetail well with the traditional songs and tunes on the album. The wealth of instrumental skills in the band means that they can make every track have a completely different texture.

Energetic tunes alternate with beautifully harmonised songs such as the opening track “Troubles” and “Vandy Vandy”.

Placed in the middle of the album is the epic Scottish Child Ballad “Eppie Morrie”, which tells the story of a woman resisting the unwanted advances of a young man called Willie. This is a solo for Olivia Ross, who plays the part of the feisty Eppie Morrie well. The song also includes some lovely interludes from the flute and strings.

Olivia also takes the lead on her own composition “Morning Star”. There is more vocal brilliance in the traditional Gaelic “Puirt”, sung by Rachel Newton. Unfortunately there is no hint as to the meaning of the song in the sleeve notes, but an internet search reveals that this is a traditional form which often has bawdy lyrics, so perhaps that is just as well.

The album begins to draw to a close with Laura-Beth Salter’s gentle instrumental composition “Room to Breathe” before ending as it began, with more close harmony and rich instrumentation in “Sugar and Pie”.

An excellent album, and one which should appeal to fans of instrumental music and song alike.

Released by Shee Records on 1 November 2010.