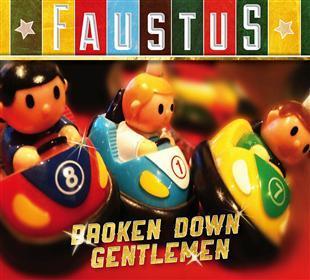 After a hiatus Faustus have returned with their second album Broken Down Gentlemen. A humorous description for the three-piece perhaps, but hopefully not one describing how their musicianship has changed since their cracking debut album.

Thankfully the title, whether autobiographical or not, is no reflection on the songs the album contains. With singing duties split nearly evenly between Paul Sartin, Benji Kirkpatrick and Saul Rose, one soon remembers just what is so exciting about Faustus. Not only are they excellent musicians, but their voices are all extremely enjoyable, with different characters that work really well in harmony too.

Faustus provide the listener with a mix of well-known songs and a few lesser-known gems, to create an enjoyable album which holds the attention. As ever, each singer brings a different mood, although for once Paul has been let loose on a couple of less miserable stories, particularly Og’s Eye Man.

But he is still at his best conveying an edge of woe and desperation on American Stranger. This song is one of the highlights of the album, also containing some classic harmony singing from the band.

Of the better-known tracks, Banks of the Nile is the most noteworthy. Being used to hearing versions such as Fay Hield’s majestic one, it’s refreshing and engaging to hear something quite different with Benji taking the lead on vocals. It is a very ’Faustus’ arrangement, and by gosh it works.

There are a couple of misses on the album, with Captain’s Apprentice slightly dragging its heels, and Lovely Johnny just falling a little flat. But this may be due in part to the quality of the rest.

Blow the Windy Morning starts with a lovely fiddle introduction and is a vibrant number, which builds to some excellent variations on the refrain melody as it reaches an end. But I Wish, I Wish, sung by Benji is the pick of the album. It gives the listener something upbeat, multi-layered and constantly engaging. It has an edge of folk rock whilst still retaining the quintessential Faustus features, and the use of the Cor Anglais gives a further richness to a very ’big’ sound.

The one thing perhaps missing from this album is a tune set, something Faustus did to great effect on their first album, and which would provide an entertaining interlude to the songs. The band are such accomplished players of their respective instruments it would have been nice to hear this come to the fore.

Thrashing Machine provides a pared down close to the album, whilst amply demonstrating Faustus’s cheeky side. Rarely has innuendo been less obvious than in this little ditty of the farmer and young Nell.

Faustus had a lot to live up to after their debut album, and their reputation as a live act. Broken Down Gentlemen is a worthy addition to their output, and one that will play especially well live.