Katriona Gilmore & Jamie Roberts - Up From The Deep 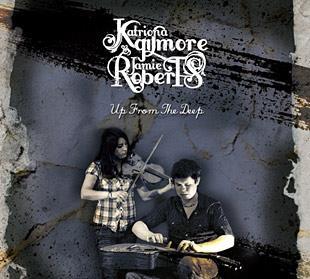 A welcome second album from this duo who seemed to be destined for great things. The first half of 2011 looks set to be exciting for them as they support Fairport Convention on a 32 date tour, (29th January to 5th March 2011) followed by their own tour later in the spring (1st May-11 June 2011).

Up From the Deep contains arrangements of traditional material as well as original songs and tunes, all very much in traditional style. Katriona’s interest in bluegrass music also comes to the fore.

Jamie’s composition “All I’ve Known” is a strong opening track, with some lovely rich harmonies and a catchy chorus. His other contributions include “The Bookseller’s Story” (inspired by an epitaph) and the tune “Punch and Chase”, named after a childhood game.

Katriona’s compositions include two tunes called “The Badger Set”, the haunting “Fleetwood Fair”, on a traditional theme and “Off to California.” The latter has a definite bluegrass feel, with guest musician Cia Cherryholmes on banjo. More American influence is evident in the tune set “Tennessee Green” which features PJ Wright on pedal steel.

Among the traditional pieces is “Shepherd” a lovely gentle arrangement of a traditional song, with the addition of the well known tunes “Shepherd’s Hey” and “The Shepherd and His Fife.”

Another traditional song “Nothing at All”, with a tune written by Katriona, brings this excellent album to a gentle close.

A well constructed album, with an interesting selection of traditional and original material. It showcases their talents well and is a worthy successor to "Shadows and Half Light".