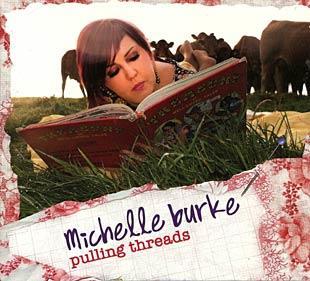 This is the debut solo album by Michelle Burke, ten ballads sung in a wonderfully expressive and rich voice. Thankfully, despite considerable singing experience and training she has kept a strong and lovely Irish accent.

In addition she has attracted a formidable range of talented performers in support. The line up includes Kris Drever on guitar, Aidan O’Rourke on fiddle and cello and Karine Polwart on vocals. The most prominent instruments that introduce most tracks are the guitar and James Ross on piano.

The reason for the album’s title, ’Pulling Threads’ is not explained in the sleeve notes, but given the nature of the songs I think maybe it’s the kind of pulling that leads to unravelling. Certainly all the songs focus on the rougher parts of life’s pattern, from death row to abusive marriage.

There are some very fine songs on the album and while all don’t appeal to me they are without exception beautifully sung.

One of the high points is the first track, ’Molly Bawn’, a hauntingly effective version of this traditional song about a tragic shooting accident. From the opening bars you can tell it is going to end badly and the repetition of the last words in the final chorus seem to make the horror all the more vivid. Life certainly doesn’t unravel quicker than when you shoot your fiancée under the mistaken impression that she is a swan.

The next two tracks have awaiting execution as their subject. ’Hey Mama’, is a straightforward appeal for prayers, as despite wistful thoughts on nature, there is really no way out. Track three is Dylan’s ’I shall be released’, quietly and sensitively sung, and as with all the tracks subtly and skilfully accompanied. There may be some debate over the impending execution angle of this song, but that’s my interpretation.

The next track ’Springhill Mine’, is a powerful song about a catastrophic mine fire in Canada. The lyrics are not overly dramatic and the hammer-like, irregular percussion is strikingly effective. The rest of the recording has more good songs, including ’Broken Bicycles’ by Tom Waits.

Because Michelle’s voice is so attractive the rather downbeat feel of the album is not immediately obvious, but I feel that one or two slightly more optimistic songs would have helped by way of a contrast, without losing the theme.

1. Molly Bawn
2. Hey Mama
3. I Shall Be Released
4. Springhill Mine
5. Where Are You Tonight I Wonder
6. I Would Be Stronger
7. Broken Bicycles
8. The Ballad Of The Sad Young Men
9. Tears Of The Sun
10. I’ll Take You Home Again Kathleen