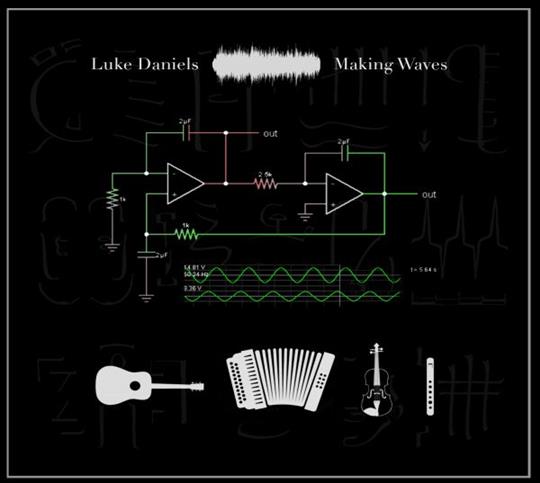 With an impressive CV, including time as a band member for Riverdance, button accordion player Luke Daniels returns to his musical roots with Making Waves, an album of original tunes inspired by traditional music.

Making Waves is a veritable aural collage, using samples of archive recordings of Scottish, Irish and American folk musicians as well as other sampled material. The influence of these national traditions is very much evident in Luke Daniels’ compositions. The live musicians on the album have built on this foundation.

The other notable feature of the music is the polyphon, an unusual instrument rather like a giant music box which produces a very distinctive sound.

The guest musicians John Doyle (guitars and bouzouki), Mike McGoldrick (whistles) and Aidan O’Rourke (fiddle) play on most tracks, while James White appears on two, on guitar and mandolin.

While the tracks seem to lead seamlessly into each other, each is different in character. The Jolly Tinker has a somewhat unearthly opening, featuring a mixture of the polyphon, old field recordings and sampling. The fiddle, accordion and whistle are then woven in.

This collage effect continues in The Larks, where the samples are an unusual combination of speech and music, including some brass. Again, the accordion and whistles play over this, eventually joined by guitar. The final product is quite mesmeric.

The polyphon and accordion duet in McCrone Jigs, with the former showcasing its musicbox-like qualities. The album ends with this combination in the Cumberland Reel.

Banjo Breakdown heralds a complete change of mood with a bluegrass feel. Aberdeen Blues, in spite of its title, shows a cajun influence. Bullying Well also has blues influences, beginning with a twanging guitar sound. This develops into a full band sound as the other instruments add to the texture, returning to the minimalist blues sound as the tune ends.

A really interesting, experimental album, which deserves to be revisited to fully appreciated the many layers it contains.