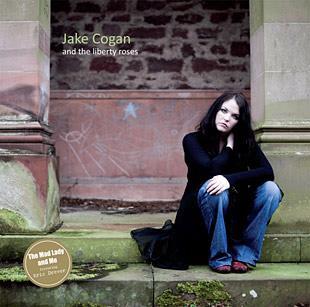 Jake Cogan returns with her first full length album with the Liberty Roses, channelling traditional folk alongside American influences and a heavy dose of contemporary songwriting.

The opening track ’The Endless Road’ sets the tone for the album, at once both engaging and laid back, with a wonderful keyboard riff.

Kris Drever guests on guitar on four tracks and also on vocals for ’The Mad Lady and Me’. ’Quarter Moon’ featuring Kris, has a sublime fiddle and cello slide and a good line in the duality of love.

The Liberty Roses have a distinctly American-influenced sound, particularly in their use of guitar and banjo. This accompaniment compliments the soulful voice of Jake, which betrays little of her Scottish and Irish origins.

’Tonight’ has great percussion on the tabla, providing a slight Eastern flavour to the track. In fact, throughout the album the instrumentation is rich and interesting. However, the lack of significant tempo changes does allow the second half of the album to drift away, even though the individual tracks have merit.

The album contains one traditional track, ’Rain and Snow’, which tells a tale of marital disharmony. Jake delivers a hint of the blues lament in her vocals which is complimented by the inclusion of banjo.

Jake Cogan and the Liberty Roses delivers a collection of interesting and well-executed songs, perfect for listening to over a glass of whiskey.