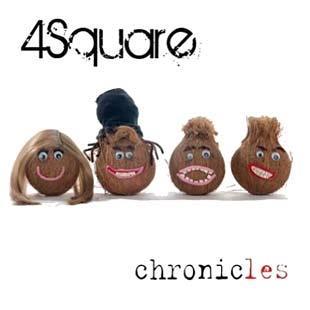 4Square’s first album “20:20 Manchester” was a well crafted work, and their second “Chronicles” is continues that trend. The band has a unique way of interpreting folk music, with a laid-back jazzy feel, due to the inclusion of keyboards and light percussion.

Despite this, there is no lack of energy in their music. Their particular strength is in their delivery of tunes, and this album has a wealth of them, from the traditional (“Roman Wall“, “Coridinio“, “Elzick’s Farewell“), to cover versions (“Walter Leask“, “Tommy’s Tarbukas“, “Trip to Miriam’s“), to their own compositions (“Searching for Pollock“, “Les“, “April Snowfall“).

Their skill as composers is very much in evidence, as every member of the band has at least one of their own compositions included on the album.

Three of them sing too - Nicola takes the lead on Karine Polwart’s beautiful “Follow the Heron”, Jim sings the rather risqué traditional song “The Trooper’s Lad”, and Dan sings his own composition “Pretoria.”

The latter is a moving song about a mining disaster in Lancashire in 1910 and was hardly mentioned in news reports of the time. His vibrant, tune “April Snowfall”, with a funky latin opening is only called that because it was written during a snowfall in April. The style could not be less like a gentle snowfall!

It is great to hear the band developing their skills on this album and they are equally formidable live. Nicola can play the fiddle and clog dance at the same time and one track includes a car horn tuned to E flat!