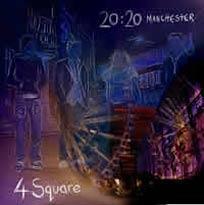 A first album from the young Manchester-based 4 Square. Well, I have to admit that I did see them live over the summer, but honestly couldn’t remember it! Not, perhaps, the most promising of starts, yet they are quickly establishing themselves on the festival scene, and this album is both a wonderful listen and a promising look at the future. It took a few listens through of the CD (not a quick task - the full CD lasts well over an hour!). But most definitely time well spent.

The CD begins with a really slightly odd very short track which seems to consist mainly of assorted percussion and church bells. A strange beginning, but the CD rapidly asserts itself as a varied, occasionally dancy, and very listenable album.

The tunes are wonderfully lively, never repetitive, and are rather more sure of themselves than the songs, though the album is fairly evenly split between the two. The tunes spin off in all sorts of weird and wonderful directions, but always return to the folk/jazz root that is the basis of 4square’s distinctive sound. Vocal duties are shared between all four members of the band, and there are some lovely harmonies on the big choruses.

There are occasional strange moments, mostly noticeably at the start of ’Schnee’, which perhaps show the relative youth of the band, and yet somehow these fit in perfectly without destroying the feel of the album, which they very easily could.

The standout track on the CD has to be the wonderful (and wonderfully named) Balls - which, between banjo, fiddle and the rather excellent percussion goes rattling along in a ridiculously cheerful and upbeat manner with a beautiful piano break in the middle.

If I had to have a niggle, it’s that the album is very long in this current climate of vinyl-length albums - some harsher editing of what was included wouldn’t have gone awry.