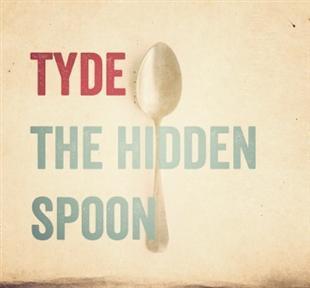 Tyde return with a bigger sound for their second album, The Hidden Spoon (the meaning of which is a secret, apparently). As well as “having all got better as musicians”, according to accordionist Andrew Waite, the trio have augmented their line-up with a few guest musicians.

Percussionist Jim Molyneux and bass player Pete Thomas both make a big impression - Molyneux’s driving percussion is instrumental (as it were) to this energetic record - so it’s appropriate that both are a major feature of opening tune set Pietros, in which Waite, fiddler Heather Gessey and guitarist Seth Tinsley showcase their skills competently, if not thrillingly.

The album immediately gets more interesting, however. Next up is the bittersweet, catchy Haslemere, sung breezily by Gessey. The story is ostensibly one of regret, but there’s an irresistible feel of optimism and a flash of humour about the lyrics (“I guess I’ll have to wait ’til you get divorced”).

The title tune set is more intriguing than the opener, with Waite’s spicy accordion playing a particular highlight. Waite composed the stately RBS Jig, too. It could be a solemn meditation on the banking industry (he wrote it, impressively, in a Royal Bank of Scotland queue) - or it could just be a lovely tune. Either way, it’s a pleasure to hear. As is Twairse, a meandering, cheeky-sounding piece, which picks up its heels and races to a thrilling climax.

Katrina tackles the devastating 2005 hurricane of the same name. It’s full of interesting imagery, but whether the song is in possession of the requisite gravitas for its subject is uncertain. Far better is Evening Solace, a deep, thoughtful Charlotte Bronte poem set sensitively to music.

Skytehound parts I and II make a great centrepiece for the album, the swooning, beautiful first part melting into a funky extended outro, with Tinsley’s guitar providing weight and power while his bandmates pass the exciting, chaotic tune back and forth.

They keep up the frantic pace for the finale of The Pig, which paints a smile on to the listener’s face, and again showcases an inventive band having a ball playing together. The Hidden Spoon does have a weak point or two, but when they’re on form, Tyde are very hard to resist.

Released on Mrs Casey Records. Available through all major outlets from April 2013 or earlier via the band website.