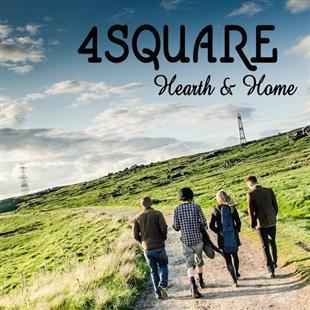 Acclaimed Manchester band 4Square is back with a new studio album this winter, proving there’s nothing ’square’ about folk music.

Hearth and Home is the third album from the group, who first started performing together as teenagers. A few years on, 4Square are now old hands on the festival circuit, and this maturity has fed through to their latest album.

This is a band well known for incorporating a bit of jazz into traditional folk songs, and Hearth and Home is no different. As the very first track, Swings & Roundabouts, kicks in with a drumroll and a funky piano intro, you know you are in for something quite modern. At the same time, traditional tunes are never forgotten, and this results in an interweaving of genres, as well as juxtaposition of old against new.

Well-known songs such as the traditional Sweet Jayne and John Tams’ Hold Back the Tide are mixed in smoothly alongside original material from the band such as My Tale and Me, a beautifully written song about fox hunting, penned by band member Dan Day. One of the more unusual original compositions is Dreadless by Jim Molyneux, a tune which evokes the ticking of time in the percussion, with some beautiful piano and fiddle parts skimming effortlessly across the surface.

Other tunes from the album may seem particularly familiar to fans of the late Gordon Duncan, as two of the tracks (The Belly Dancer and Pressed) both include tunes by him, with the latter also being famed for its appearance in Rubai by Flook. Listeners who are new to the folk scene will also feel at home, with The Belly Dancer featuring inspiration from the atmospheric song Everything in its Right Place by Thom Yorke of Radiohead.

In terms of vocals, with this album the band have stepped it up a notch, and Sweet Jayne and Lily of Barbary in particular feature some well-placed three part harmonies.

Overall, this is a varied album which shows how far 4Square have come. Influences for Hearth and Home come from a whole range of regions of the musical world, and it’s for this reason that it will appeal to so many listeners.