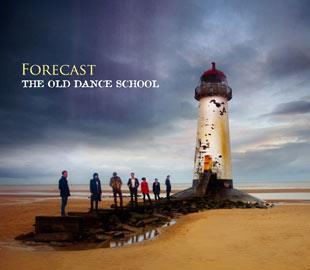 The second full-length release from The Old Dance School, Forecast is a timeless mixture of instrumental tunes, and modern-day folk song, brought to life by their infectious love and enthusiasm for the tracks they have chosen.

Inspired by vocalist and guitarist Robin Beatty’s childhood holidays in Wales, Forecast’s opening track takes its name from the Welsh for Bardsey, Ynys Enli. The band waste no time in showing off their enormous musical talent with this instrumental number. Highly evocative, the driving fiddle line conjures up the sensation of being right by the sea, which the other instrumental lines feed of until you truly believe you are stood on Bardsey watching the waves break on the rocky shore.

For me, however, the highlight has to be ’John Ball’. Written in 1981 to mark 600 years since the Peasant’s Revolt, the Old Dance School have put their own mark on Sydney Carter’s interpretation of John Ball’s call to arms. The result is indescribably beautiful and flows seamlessly from the speakers, surrounding you with the sound of mellow strings and smooth vocals.

Originally written by Andy Cutting, ’Spaghetti Panic’, is an intriguing melody, which definitely makes maximum use of having two violinists within the band. Constantly changing and developing, there is no missing the tension at the heart of this piece, which builds and builds thanks to Tom Chapman’s relentless cajón.

As with Enli Light, their performance brings the music to life, and it’s easy to imagine cooks and chefs across the country manically running around the kitchen as the clock counts down to dinnertime. (Though as they mention in their disc notes - the tune works just as well when negotiating the mad-panic that is Spaghetti Junction.)

With four years playing together under their collective belt, and each member a remarkably talented musician in their own right, Forecast was destined to be a remarkable album and they have most definitely lived up to expectations. A true gem from a band who, while young, have a clear vision and an excellent ear for a tune.