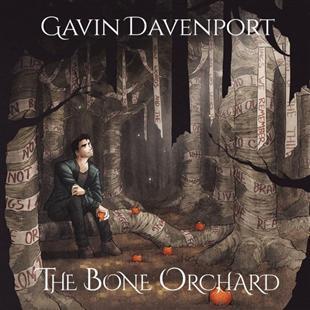 For his second album, The Bone Orchard, Gavin Davenport has pledged to actively focus on characterisation - to attempt, via his singing and arranging, to explore the ’intrinsic humanity’ of narrative-led songs. It’s an interesting approach - folk singers should be doing this anyway, perhaps - but does it work?

Atmospheric background groans and percussive judders introduce us to opener Whitby Lad - a close relation to Jim Jones in Botany Bay, which appears later on the album. The grim tale is stoically and strongly told - it’s easy to imagine it soundtracking the introduction to some epic seafaring film.

A strong start, then. And Davenport does indeed adjust his style to suit each song, with engrossing results. Jim Jones (which seems to reference Nic Jones’ Humpback Whale, distractingly) is wearily bleak, for example, though there’s a jolly Long Legged Lurcher Dog.

Amid a multitude of instruments, his vocal delivery is the one constant: simple, soft and pleasantly northern - much like the warmly rueful Farewell to Yorkshire, in fact. There is the familiar brass of Davenport’s Yorkshire homeland on Wooden Swords and May Queens, too. But he’s not stuck in one musical landscape, happily incorporating some Americana-style banjo on Creeping Jane.

Indeed, arrangements are kept interesting chiefly by Davenport’s ability to turn his hand to so many instruments - and his canny use of guest musicians. Fair Rosamund - about the beautiful mistress of King Henry II - features dramatic, tense strings. The haunting, engaging Bold Dragoon gets rasping hurdy-gurdy and military percussion to subtly underline a strange feeling of dread.

Davenport also makes neat use of additional vocalists, notably on Banks of Yarrow, which features the always welcome, chocolatey-rich voice of Jim Causley. The pair sing it without accompaniment and with gentle harmony, confidently allowing the story to pull the listener in.

Some might find the production a little murky, rather than ’cinematic’, but it’s hard not to appreciate the care that’s been taken. Spoken words and field recordings float in the background of the album’s moody title track, returning at its conclusion with renewed, unnerving intensity.