Alan Kelly - After The Morning 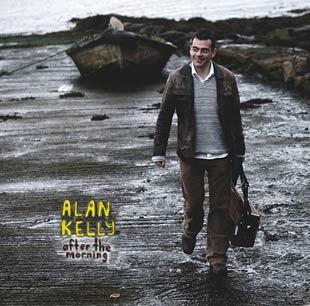 Regarded as one of Ireland’s most accomplished musicians, Alan Kelly is a piano accordionist, composer and arranger utterly at home in his own skin.

After almost a decade since his last solo outing, for this (his 3rd solo, self-produced album, After The Morning, Alan has bought together a superb group of musicians to create tunes and songs featuring Jim Murray (guitar), Jim Higgins (percussion), Tola Custy (fiddle), Ian Carr (guitar) and has even roped in Eddi Reader and Kris Drever to sing vocals.

The album opens with two jigs After The morning/The Night Owl (both composed by Alan himself) which give the listener a lovely gentle introduction to Alan’s musical style and features guitars, percussion, fiddle and, rather surprisingly a Hammond organ.

After a re-imagining of two old reels (The mountain Top / The Jolly Tinker) which ups the pace slightly comes the first of the songs and one of my favourite tracks on the album.

I Hung my Harp Upon The Willows was written by John Douglas, who plays guitar on the track, and has vocals by Eddi Reader. It tells the story of the poet Robert Burns who, when walking with a friend through the woods of Irvine, doubted his poetic ability. The friend, Richard Brown, heard him recite and advised his to treasure his gift and go forth! With the addition of a double bass and two guitarists, the tune has an almost American, mid-west sound to it, which sets it apart from the more traditional-sounding tunes on the album.

The Hammond organ is put to good use again on the next track, Eolann, written by Alan for and named after his little nephew Eolann. This pleasant and mellow tune is lovely to listen to but, for me, ends too soon - I was almost expecting another minute or so on the end leading you into an up tempo jig.

More reels and waltzes follow, all expertly undertaken, to be followed by the 2nd stand-out track on the album for me - Caledonia. Featuring Kris Drever on vocals and guitar, the song tells the story of a man who moves to Cape Breton to work in the Caledonia mine. Kris’ vocals give the song a wonderful, melancholy sound, and the simple arrangement of the accordion and guitar serve to highlight his wonderful voice.

The final four tracks on the album take the listen on a whistle-stop tour up the west coast of Europe - via Northern Spain (Jota Da Maia), Breton (La Ballade and Breton), and back again to Roscommon with the wonderful self-composed New Years Day.

The whole album is perfectly balanced between beautiful self-composed tunes with a good solid grounding of Irish, Breton and Asturian traditional tunes and is a pleasure to spend an afternoon with.