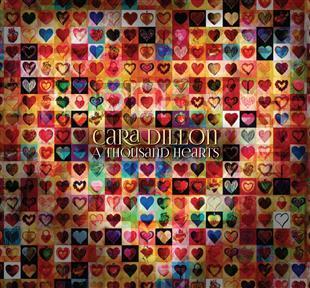 Cara Dillon fans will be pleased to know that after a gap of five years, she has released a new album. A Thousand Hearts has a loose theme of affairs of the heart and features mainly traditional material with the inclusion of two rather unusual cover tracks.

Many of the traditional songs are given a fairly standard treatment, with Jacket So Blue kicking off the album with a full band of guitar, bouzouki, fiddle, accordion, whistle and percussion. The full band sound on the album is rich but never overpowering, making it easy on the ear.

By contrast, the final track, As I Roved Out, being a mournful song, is given a much gentler sound. The voice is supported by minimal guitar and piano accompaniment.

Bright Morning Star, a favourite at singarounds, where it tends to be sung belted out and unaccompanied, is given a much more subtle treatment which couldn’t be more different. It begins very much as a solo piece with subtle harmonies and more instrumentation gradually being added. Pleasant instrumental interludes build up the texture, dying away to simple guitar accompaniment and rich harmony a capella singing as the song ends.

The covers appear right in the middle of the album - Shotgun Down the Avalanche (Shawn Colvin) and River Run (a 90s indie pop song about River Phoenix). The latter is striking for its stark, poignant arrangement featuring just voice and keyboards. “Shotgun” features mainly guitar accompaniment and is rather more upbeat in style.

A couple of songs are in Irish Gaelic - Éirigh Suas a Stóirín is set to a lively, danceable tune in which the instrumentalists have free reign to wallow in classic Irish traditional style - toe-tapping stuff! Táimse im’ Chodladh is much gentler with just voice and piano. Sadly, the sleeve notes have no translations of these songs.

A Thousand Hearts is a welcome return which will delight Cara Dillon’s many fans.

Released on 19th May 2014 by Charcoal Records in partnership with Sony Music.