Maggie Boyle - Won’t You Come Away 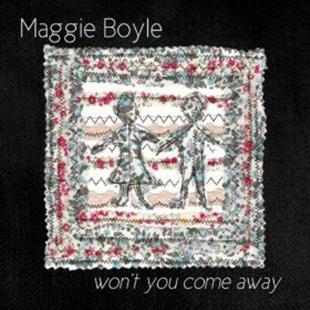 Won’t You Come Away is the name of Maggie Boyle’s third solo album. It’s a statement not a question, captured evocatively on the cover by a patchwork square with a man and a woman holding hands. The listener really has no choice, it’s an invitation that can’t be refused.

Maggie Boyle draws us in using the sensitive power of her voice. She is supported admirably by Paul Downes on guitar, mandocello and mandolin; Jon Boden on fiddle; Dave McKeown on clarinets; Steve Tilston on arpeggione; and Dave Wood on Arnold Resonator guitar. Maggie herself plays flute, whistles and harmonium.

Maggie says of this album, ’It’s special to me. I have included traditional songs from my childhood, extending to beautiful, newly written songs by friends and relations, and brand new tunes.’ All the songs, whether new or old, are distinctive and fresh. The variety of styles and types of song make Won’t You Come Away a pleasingly varied listening experience.

Dawning is a modern song set to music to which the polska can be danced. It is a light lively tune with uplifting lyrics by Maggie’s friend Frances Watt.

Once in a While, by Steve Ashley, brings back memories of early Mary Black songs. This is partly the arrangement which starts with Maggie singing unaccompanied. The guitar and then the woodwind come in just in time for the chorus.

Other modern songs in this vein include the Anglo-Irish Nick Burbridge’s Old Man’s Retreat, a vehement and courageous lyric, and Christmas in No Man’s Land, a song about the World War I 1914 Christmas truce by Mick Ryan, a day when the Germans, French and British spontaneously met up at a game of football.

Donal Og, a traditional song, is a particular treat. Maggie tells how this song came to her from her mentor, Oliver Mulligan of County Monaghan. ’About 45 years ago, my Dad brought Oliver to our home in Battersea - to teach me some serious traditional singing. I did my homework, it was no chore; I adore this song.’ She sings it simply with true emotion, and it is one of the triumphs of the album, the song of a spurned woman.

’You took what’s before me and what’s behind me
Took east and west when you wouldn’t mind me
Sun, moon and stars from my life you’ve taken
And God as well if I’m not mistaken’

In contrast, the lively acoustic song Liza and Henry follows. It was written by Maggie’s son who has a background in ska and reggae, and she sings it with earnest vigour.

Maggie sings unaccompanied another fine traditional song given to her by Oliver Mulligan, The Green Linnet. This shows her ability to tell a story simply through the power of her voice, not reliant on anything else to add drama or nuance to the tale.

On Yonder Hill is a hunting song about a hare that comes from Geordie Hanna. Maggie’s version is simple and disarming, followed by a new tune Boxty Bailey.

The final song Linden Lea was set to music by Ralph Vaughan Williams, and is a song that Maggie ’will never tire of singing’.

Won’t You Come Away takes the listener to a world stripped back to bare essentials, showing, as does all the best folk music, that through the perfection of plain playing true to the spirit of the music, a world can be created with nothing extraneous. It’s a world that feeds and nourishes the soul.