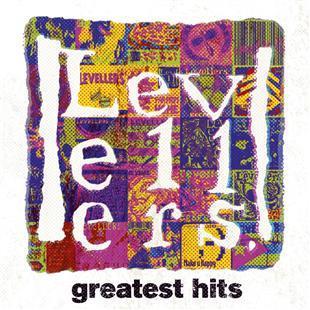 Levellers occupy a specific space in recent music history. Mention of them gives rise to nostalgic references; chaotic Top of the Pops appearances, storming festival shows, unbound passion for their causes. They can claim to be the pre-cursor to bands such as Bellowhead, Lau and the Mumfords, all artists that combine genres with successful results. Twenty-five years after their debut album they’ve released a Greatest Hits double with a few special guests weighing in.

The first album roars out of the gates with a trio of singles, Fifteen Years, Hope Street and What A Beautiful Day. They remind you just how ferocious their attack on your senses could be, all three with guitar riffs you can chew on, underpinned by rolling bass notes that allow the anthemic melodies to soar. A real sense of joy pervades the playing, as is the unusual addition of synth (Hope Street) and brass (Beautiful Day), in songs with folk-rock origins. Belarus’ bass intro is more akin to early Sisters of Mercy than traditional folk and boasts a middle-eight that’s straight out of the 80s hair metal playbook.

The album doesn’t draw breath until Before The End. 1998’s Bozos borrows heavily from the Kinks’ You Really Got Me in the opening riff, follows it with a dance beat before settling into a verse riff The Almighty might have written. The lyrics are a far cry from lost loves at sea too: ’I swore from the day that I was 22 / That I’d never touch another can of Special Brew’. Beautiful Day is reprised in a new version featuring Imelda May. She has a great voice but the arrangement loses some of its power. Frank Turner’s vocal on Julie elicits a similar response.

Album two mixes the pace and feel up a little, adding the personal to the political. One Way’s Britpop-styled guitar is a pub sing-along, the original Julie has a lovely melody, and the duo from 2002’s Green Blade Rising, Wild As Angels and Come On are catchy Wonderstuff-derived pop. Elsewhere, however, the songs lack anything as sparkly as the earlier music from the first album and two tracks don’t do the band justice at all. This Garden’s strange Damon Albarn spoken vocal feels dated and a limp The Devil Went Down To Georgia is an example of why some songs don’t need a modern treatment. Of the new versions, only Bragg’s Hope Street vocal aligns with the original but again the arrangement is weak.

Levellers wear their hearts on their sleeves and are to be celebrated for it. It’s a model that works best when they have something to rail against. The 90s hits were predicated on a gung-ho spirit that isn’t maintained. The sequence at the start refers to an excellent best of. As it is, Greatest Hits only delivers half of the time.

Released 29th September 2014 by On The Fiddle Recordings