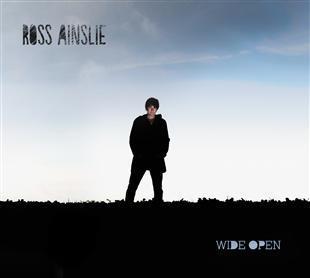 Wide Open is the debut solo offering from Ross Ainslie, an artist best known for his duo endeavours with Jarlath Henderson.

Despite this being a first solo project, Ross is far from new to the folk field, having previously collaborated with musicians including Salsa Celtica, Michael McGoldrick, Capercaillie and Flook. He was also a Folk Award nominee in 2013 (musician of the year) and 2014 (best duo).

This is an album crammed full of instrumental skill. Ross himself plays a range of pipes and whistles, as well as cittern and mandolin. The record also features a host of guest musicians, including Ali Hutton on guitar, Duncan Lyall on bass, James Mackintosh on drums, Innes Watson on fiddle, John Somerville on accordion, Angus Lyon on keys and Gyan Singh on tabla.

The most predominant influence to be heard in this album is a Scottish one, but there are a few surprises thrown in along the way. Track 8 (True) has Indian-style percussion in its introduction, and track 4 (Clans) has some Breton roots.

The final track (To the Woods Suite) has a whole range of influences. After a traditional Scottish beginning, the pace of this piece slows after a couple of minutes and what follows would not be out of place on the soundtrack to a cowboy film. Further in, some Indian themes are heard, before the whole piece wraps up with a distinctly jazzy ending.

Another element which makes this record special is how personal it is. A great example of this is track 6 (Wedding Waltzes). This piece fuses together three waltzes, each named after the people for whose weddings they were written. The album as a whole is clearly a very personal project, serving to gather a whole range of Ross’ musical influences and experiences into one place. The record is also, poignantly, dedicated to his teacher and mentor, the late Gordon Duncan.

Overall, this album is sure to be a hit with fans of Scottish music, but its personal touches and international influences ensure a broader appeal. One could even say, if you’ll excuse the pun, that it’s a record ’wide open’ to a whole range of audiences!