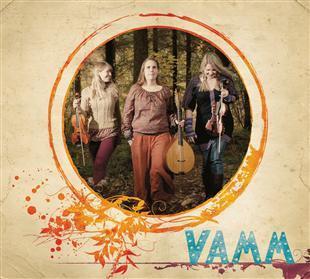 "Vamm is an old Shetlandic word meaning to bewitch or entrance. It’s a good sounding word, and there aren’t many groups that start with a ’V’.”

Vamm is a collaboration between Patsy Reid of Breabach, Catriona Macdonald from Blazin’ Fiddles, and Marit Fait - two fiddles and a latmandola (which is a Nordic mandola, similar to a mandolin or bouzouki). The trio live up to their name. They are mesmerising, interweaving tunes and melodies to delight the listener.

Vamm also sounds Scandinavian, it holds the spectre of a ’va va voom’ within, and is surreally close to ’Wham’. There’s an energy and a holding power in both the name and the music that these three musicians make.

The album opens bravely with The Duchess, a lively piece by Aidan O’Rourke from Blazin’ Fiddles. This is a wise choice to open, as it shows off the talents of the three musicians to fine effect. It transitions into a polska with an even livelier tempo.

Castle Grant, a piece by James Scott Skinner published in 1904, follows. It is executed with beautiful simplicity, with a great deal of unison playing and careful building to a strong and emotional climax.

The next piece, The Ostrich, reflects the talents of its composer, Jim Sutherland, who produced two songs for Disney Pixar’s Oscar-winning animation Brave. The syncopated rhythm and percussion capture an ostrich’s slightly jerky motion.

The first slower piece follows, Miranda, named after a cat. It is a major polska, which has a majesty to it, making it easy to imagine dancers in formation.

This is followed by a return to characteristic toe-tapping music with Better Days, a set of three tunes. The title and last of the three tunes was written by Marit Fait, who has composed a few of Vamm’s tunes. She explains that it was "Written after a bad couple of weeks. I had one good day which inspired this tune. Everything got easier after that day. I intended to make a reel but, being Swedish, it obviously turned out to be in 3/4."

To the West, a tune from the Fort William-raised fiddler Donald Grant, is appropriately paired with Felgubben, a traditional tune from the North of Sweden which means ’the wrong man’ or ’fiddler man’. In the first tune the musicians share the melody and play to each other. This is another stately piece which conjures up images of poised dancers in a regal setting. It merges into the title piece which changes character with ease.

Next comes traditional Scottish music, The Burnt Leg, three tunes from The Skye Collection of strathspeys and reels, published in 1887. The Winning Ticket is another set of tunes, including a Halling - a traditional dance from Norway where men try to kick a hat off a stick, framed by two Cape Breton pieces.

Lurkas is a dreamy piece showing the meditative powers of the mandola. It was written by Marit’s fiddle tutor in Bollnäs for the play Ronja the Robbers Daughter, based on a book by Astrid Lindgren. The interplay of strings and mandola is pure and heart-rending here. A strong strain of wistfulness is invoked. The fiddle brings a feeling of yearning and seeking which intensifies as the music builds.

Vamm ends with a piece by Darren Milligan, a piper from Northern Ireland. He wrote it for his grandparents and it has an air of appreciation and warmth. This is a pleasing piece to end with, as it leaves the listener feeling contented.

Vamm play together as if they have always been together. They are three individually fine musicians. Coming together in this collaboration produces some great instrumental music spanning several continents and traditions. Long live Vamm.