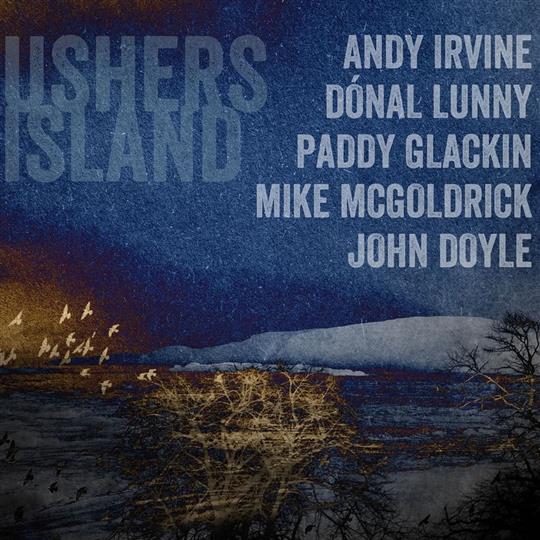 In a nutshell, here’s Ireland on a small digital disc of shiny plastic. The quintet that form Ushers Island have farmed the rich musical heritage of the emerald isle on an album that oozes Irish musical history.

Don’t get side tracked by the minutiae of whether or not there should be an apostrophe - none appears on the sleeve so best to stick with that - in rock and roll terms Ushers Island would find themselves cast as a supergroup. Of course there’s no such thing in folk circles, as the distinct lack of self-restricting boundaries makes such a collaboration regular practice. Supergroup they may not be, yet they are a group of super, or best make that superior, musicians.

Andy Irvine and Donal Lunny, who go back to the seventies with Planxty, combine with Bothy Band fiddler Paddy Glackin to make up the old guard with Mike McGoldrick and John Doyle providing the youth - the new young upstarts by comparison. Having debuted live some two years ago, the band have finally got together for an album, rendezvousing at the McGoldrick cottage in Co.Galway, itself a building with a history of music making.

Songs with a rich legacy litter the set and wind their way with elements of comedy and tongue-in-cheekiness, sitting side by side with the more customary war and slavery narratives.

The slowly smouldering Bean Phaidin, recorded by Donal Lunny with Planxty, is revisited after a mere 44 years, and Felix The Soldier, described as “an almost extinct gem” is revived, typical of how folk music works. All summed up in Andy Irvine’s As Good As It Gets.

The songs form the meat of the album yet are punctuated by a marvellous collection of tune sets that light up the collection, conjuring up an image of all five players delighting in encouraging each other through the hornpipes, reels and trips, and all manner of tricky time signatures.

These are taken from the Goodman Collection, from Donegal fiddling brothers John and Mickey Doherty and from The Chieftains’ Sean Keane. The opening Half Century Set does a fine job in setting the tone and the way the tunes flow in the Five Drunken Landlady’s set conjures up a vision of the five gathered for a full on session just for the sheer joy of playing.

Ushers Island is a quality yet organic piece of work.