Martin & Eliza Carthy - The Moral of the Elephant 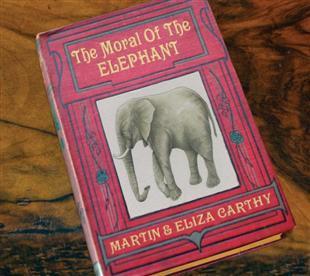 Eliza Carthy has come over all literary on us of late, and this brand new duet album recorded with her folk legend father continues this trend.

Fans of Eliza may have heard a fairy tale penned by her featured recently on BBC Radio 4. Indeed, both Eliza and Martin are well known for the heartfelt human stories which are woven into every song they perform, so it’s no surprise to find that each track on this latest release has a fascinating tale behind it. What’s more, a number of the songs on this album are inspired by poetry, and one track (Grand Conversation on Napoleon) features a spoken recitation of verse. There’s even an image of a book on the album cover, to complete the CD’s transformation into literature!

As always, Eliza and Martin are keen to explain the roots of each song. From the Cumbrian flavour of Blackwell Merry Night (complete with quirky dialect terms!) to the alternative history lesson offered by Grand Conversation on Napoleon (which tells how the English actually supported a Frenchman), it’s certainly more diverse than your average storybook. Suitably, parent and child bonds are also explored, although these are far from sickly sweet, with the first track (Her Servant Man) featuring a father who locks his daughter in a dungeon!

Despite having over 70 years of recording experience between them, and having performed with just about everyone on the folk scene, it’s surprising to note that this is the first time father and daughter have taken time to record just as a duo. The result is well worth waiting for, as beautifully arranged combinations of guitar, fiddle and voice come together to form something quite divine.

This is an album where vocals are key, and at no point do instruments steal focus from that. In Happiness, for instance, the guitar forms a backdrop, the simplicity of which serves to exemplify the rich beauty of Eliza’s velvety tones - and to showcase some rather spectacular whistling!

This is an album of slow reflection and unfettered artistry, which really digs into the roots of English folk. It’s also an album with great meaning, and in no song is this more prevalent than in the final track, Died for Love, the arrangement of which was chosen by the late Mike Waterson, and which has been lovingly recreated by Eliza and Martin. If you’re wondering where you’ve heard this one, you will be familiar with it if you saw the performance at the Radio 2 Folk Awards.

Right at the centre of this record sits the titular track, The Elephant, based on a poem by John Godfrey Saxe. But what really is the moral of The Elephant? Ultimately, it’s all about improving perception, furthering understanding and broadening minds - which is a pretty good summary of what the folk music scene ought to achieve, don’t you think?