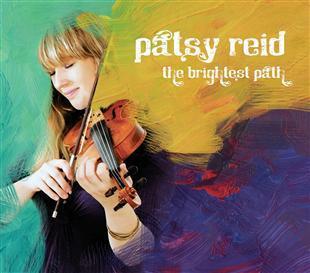 Patsy Reid’s new album The Brightest Path creates a powerful and poignant sense of place. The album is a journey, a long walk through varied countryside. Each piece has a different feeling; the pace, colour and climate changes and develops over the course of the album.

The Brightest Path was recorded live in remote Crear in Argyll, with a view overlooking Jura. The music evokes the sublime beauty of the environment where it was made.

Her first album since 2008, The Brightest Path is a tapestry of traditional tunes, contemporary songs and original compositions. It features Ben Nicholls (double bass), Ewan MacPherson (guitars, mandolin, banjo), Signy Jakobsdottir (percussion), Mhairi Hall (piano) and Mattie Foulds (drums). Patsy herself plays violin, viola, and cello. The final contributor to the band is Fraser Fifield who Patsy describes as ’the saxophone version of me’ and who brings an ethereal sound to the mix.

The first track, Hooray Henry, by Patsy, has a modern jazz feel. It starts perhaps a little surprisingly with keyboard and drums building a scene for the fiddle to enter. The saxophone wanders into a little improvisation in the middle with drums and keyboards hovering in the background. While the fiddle is at the centre of the music, all the other instruments interweave into a seamless support.

Donside follows, a traditional tune with a quieter feel. It builds with a sense of yearning. Piano and fiddle march together, playing variations on the core tune, rising and falling in relation to each other and coming back from harmony to unison. We are left with a sense of being in quiet countryside.

The piece merges into a more traditional tune midway through with keyboard keeping a low profile initially. The listener is on a walk, meandering then moving through a quiet valley to more intense climbing...

The River Princes by Ewan MacPherson is the first of three songs, and it contains the album’s title in its lyric. The song has a very bright start as if emerging from the forest into a clearing -’ the brightest path runs through the trees’. There is a real feeling of breakthrough and illumination at the heart of this title song.

Thugainn, another piece by Patsy, brings a slowing down again, a more tentative feel as the fiddle picks its way forward like making one’s way on an overgrown path. There is a Scandinavian feel to the tune - and a distinctive ornamentation to the bowing. The drums and percussion create intensity before developing into a lighter and more upbeat tune.

In A Precious Place follows. It opens with a long persistent note from the fiddle as the backbone of the piece. As the fiddle emerges, the deeply reflective and thoughtful nature of the piece becomes evident. Half Acre is the second song, a nostalgic reflection on the poignant memories we carry with us.

The pace picks up again in the traditional Bridge of Garry with a return to a more jazzy folk flavour. The entrance of the fiddle heralds a traditional folk tune offset against a contemporary backdrop. Once again, the listener has the feeling of progress on a journey, now perhaps on horseback moving across slightly rough terrain. Lightly dark overtones emerge into a sunnier major feel. This is Patsy’s fiddling at her finest with some interesting variety in the bowing to create colourings of emphasis. Bridge of Garry is one of the most compelling tracks on the album.

Lost in Green by Julian Sutton opens with a mix of instruments setting the scene for the fiddle, creating a synthesis of sound including the emergence of the saxophone. The fiddle is centre stage at first and the rhythm evokes an image of a folk dance. Every so often the music resolves into a moment with a modern feel, a pause before the fiddle returns ever more insistent. The piece fades out with the saxophone having established itself as equal player.

Kite Song is the third and final song, a wistful lyric by Patti Griffin about flying kites high, dreaming of escaping from the sadness and fear of ordinary life.

The final track, The Baby Tune by Patsy, opens with the light evocative sound of keyboard and guitar and mandolin, like fairy bells or a lullaby. The fiddle unobtrusively blends in and then provides a tune in counterpoint. The piece blends to harmony and then fades back to silence. The feel and name of this piece give a sense of birth, bringing the album to its close.

The Brightest Path is an album of many colours and moods, changeable like the weather. These are pieces that can be listened to again and again, and which really evoke the spirit of their place. 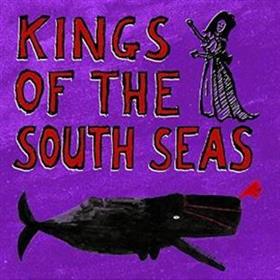