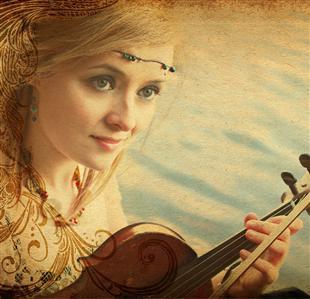 Pangea means ’entire Earth’ in Greek. The myth of Pangea is that it was the one and only supercontinent from which all of the Earth’s seven continents came. This oneness which pervades the myth of Pangea is evoked musically in fiddler Emma Sweeney’s debut album.

Emma says that ’I decided that Pangea is an apt title for this album because music, as I understand it, has an innate oneness, with a boundless ability to cut across cultural and social boundaries, thus leaving us in a state of Pangea.’

Emma’s album Pangea is one musical continent, as she deftly moves from one style to another through an eclectic mix of mainly tunes. There is a fusion of different musical styles based on the foundation of her traditional Irish background.

The album includes a range of pieces - jigs and reels, a bluegrass waltz, an old-time West Virginia blues, her own compositions, and a familiar song with an original interpretation, Nick Drake’s A Place to Be, the one song on the album.

Emma opens with three tunes which link with her childhood and her early musical roots. More tunes follow, some learned from teachers and well-known figures from the folk music tradition.

She surprises us by moving into bluegrass with The Golden Fiddle Waltz. As the album progresses, her own compositions are deftly interwoven with traditional tunes, the balance subtly shifting.

There is a tune for all musical tastes on Pangea. Emma’s versatile playing shines through. Some of the highlights are The Things Money Can’t Buy by Mike McGoldrick, one of the many skilled musicians who supports Emma, and The Wheels of the World, which showcases Emma’s traditional Irish fiddling. She ends with her own compositions Pangea / The Artist, which are dedicated to her friends in Kolkata.

Emma’s feeling for the varied music she plays comes across in the way she adapts her style to the occasion. Pangea is an inhabited garden. Emma and her musician friends think and feel with the music they play, and so do we.