Sam Sweeney - Made in the Great War 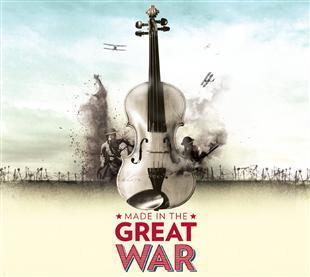 In this year when events to mark the centenary of the start of the First World War are so common, it is refreshing to hear something from a different, and very personal perspective. Sam Sweeney’s Made in the Great War tells the story of Richard Howard, the man who made his fiddle. The story comes to life with the aid of Hugh Luptons’s superb storytelling skills and the equally skilled musicianship of Sam, Paul Sartin and Rob Harbron.

From the first notes of the spine-tingling prologue, you know that this recording is going to be something special. The story begins with a rather gruesome-sounding rhyming riddle about a fiddle.
For obvious reasons, this album needs to be listened to in order. Likewise, dipping in and out will not do it justice - it requires your undivided attention. How did the fiddle come to be in the shop in Oxford? The story grasps your interest right from the start.

As the story unfolds, the music (much of it Sam’s own compositions) and storytelling are cleverly woven together. Sometimes the music happens behind the story-telling - such as the sound of Sam trying out the violins in the shop in Oxford. The music helps to paint evocative mental pictures - the description of Richard’s workshop emphasizing what a dedicated craftsman he was. The pizzicato accompaniment behind the spoken word could be him stringing and tuning a new fiddle.

At other times the music stands alone - the traditional tune Wellesley makes two appearances and marks the moment Richard Howard receives his call up papers and also the significant moment when he makes the label that Sam finds inside the fiddle so many years later. Its use is particularly appropriate as it was the regimental march of Howard’s regiment.

Hugh Lupton’s storytelling enables the listener to eavesdrop on aspects of life in the early years of the war. Life had to go on as normal in many ways - Richard’s daughter Rose was attending school, and his wife was going out to work, (albeit in a munitions factory).

We also visit Richard’s musical world - The Palace of Varieties. The music hall was still popular at that time, and many entertainments were aimed at raising morale. It is a pleasant surprise to hear a snippet of Paganini accompanied by concertina (did that ever happen?). Songs and tunes popular at the time are threaded through the story here. Paul Sartin sings Take Me Back to Dear Old Blighty, popular with homesick soldiers. This section of the story gives an interesting insight into the musical culture of the time.

Easvesdropping on life in the trenches is a sharp contrast to Howard’s former life in the music hall. Again, the music paints pictures behind the storytelling - as “Zero Day” dawns, the fiddles’ high notes imitate the dawn chorus.

The Battle of Messine begins with the chilling words “And then the world was rent asunder” and is the longest and most dramatic track on the album. Be warned - some of the details are not easy listening. In amongst all this dreadful mayhem, memories of the Palace of Varieties come flooding back.

Perhaps the most moving piece of music on the album is Hugh Lupton’s heart-rending The Ballad of Richard Howard sung by Sam. Howard is compared to a violin in the song - almost as if he lives again through it.

As the album comes to a close, we find out how the pieces of the violin Richard had prepared before he went away to war come to be in an envelope. And so the story comes full circle - a mournful epilogue from fiddles and oboe brings the story to a close.

The final track is named for Howard’s daughter Rose - a beautiful tune which begins in a sad vein but turns into a lively, happier tune as Rose’s father lives on in the fiddle Sam now plays. It pulls together many of the themes used throughout the story and serves as a perfect musical conclusion to the story.

A moving combination of sensitive storytelling and skilled musicianship.