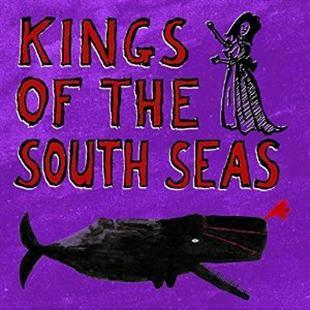 Produced by John Parish (Eels, Tracy Chapman), Kings of the South Seas eponymous debut was launched at Cecil Sharp House in November last year. Billed as a contemporary voyage through historical whaling expeditions, it features accomplished and established musicians from the current folk circuit who merge a number of styles to create their own. In doing so, their collection of reworked traditionals imbue the album with a documentary feel, albeit one with as many tall tales as true.

The first thing that strikes you is Ben Nicholls’ voice, a below-decks baritone with hints of Lanegan and Cave at their most dolorous. It’s given space to emote in a series of songs where the arrangements allow the listener to concentrate on the stories.

Those stories, occasionally bordering on music hall - see King of the Cannibal Islands, adapted from a Victorian broom dance and Disney-esque in its delivery - are cleverly stitched together to create a chronology of a whaler’s journey.

Opener I Never Missed My Home sets out accompanied only by concertina. Elsewhere the album features double bass, inventive drums and clever use of electric guitar, combinations of which layer drone-like backgrounds or, in Over The Gloomy Hills, military marching beats for Nicholls to sing over.

The journey hits windless pockets where becalmed and suspense-filled tales like The Great Sea Snake and Coast of Peru evoke vast horizons and supernatural tales that manifest amongst men long away from home.

Contrast those with the buoyant and reverb-soaked Eight Bells and the busy sing-along Sailor’s Frolic, or the descriptive Weary Whaling Ground, this latter particularly effective in driving home the realities of the whaler’s lot.

Terrible Polly begins with a rock song crescendo that reduces to a muted concertina and ambient sounds with occasional clangs and crashes for emphasis. The album closes with the appropriately titled I’m On My Journey Home, an early 19th century hymn that calls for us to join the sailor as his tour of duty finishes.

The band combine strong imagery, historical interest and assured performance in a debut that, whilst niche in terms of content, delivers on its objective to educate and entertain. It will be interesting to see what might lure them from their day jobs in the future.

1. I Never Missed My Home
2. Weary Whaling Grounds
3. Eight Bells
4. Over The Gloomy Hills
5. King Of The Cannibal Islands
6. The Great Sea Snake
7. Coast Of Peru
8. Sailors Frolic; Or, Life In The East
9. Terrible Polly
10. I’m On My Journey Home

Kings Of The South Seas discography