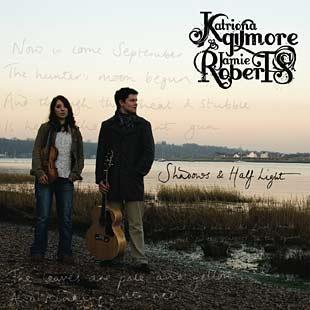 So it was that I found myself holding the much-anticipated new G’n’R album. That’s Gilmore ’n’ Roberts as opposed to the other bunch.

Katriona Gilmore and Jamie Roberts have been playing together on the folk circuit since 2006, and as well as their own performances, you may know them from their other projects: Jamie is a member of Kerfuffle - having replaced Chris Thornton-Smith as guitarist in 2007 - and Katriona has been playing fiddle with Tiny Tin Lady since 2006. While they have released a couple of EPs previously, this is their first full length album together.

With the exception of ’All Among The Barley’, the album is a collection of original songs, largely written by either Gilmore or Roberts individually, though they take joint credits on a couple of instrumental tracks. The lead vocals are similarly shared out which each taking the lead on their own songs. Of the two, Jamie has the stronger voice but I have to say that the singing is beautifully judged throughout.

The album opens on a strong note, with ’Hunter Man’ boasting an upbeat melody, catchy chorus, and a decent folklore-style lyric on a ’if you go down to the woods today….’ theme. Things slowdown with next track ’So Long’, which is suitably melodically downbeat for a song lamenting the protagonist’s apathy and inaction.

I’d read about the duo’s liking for complex arrangements & odd time signatures, and on the whole they work really well. One of the first times it really strikes you is on the stop/start nature of ’Stopped Clock’, a great little song which begins with an upbeat rhythm that lasts 12 seconds before suddenly careering to a halt, and moving into something much slower. From there on, it’s frequently changing pace, speeding up and slowing down as the strings & trombone move in and out. I loved it.

Similarly, ’White Lie’ is a fun, lively track with an acerbic lyric. Then we get the more gentle beauty of ’Susannah’, and a gorgeous version of the traditional harvest song ’All Among The Barley’.

’Pleased to Meet You’ is a deeply touching song about the experience of someone you care for having their memories wiped out, and one which sounds like it may very well have been born out of painful personal events. It is a sad, haunting song, and quite possibly the best on the album as a result.

The album wraps up with a couple of slower numbers, ’I Don’t Want To Say Goodbye’, and ’Travelling In Time’.

Alongside the songs, the CD is dotted with instrumentals - ’Middle of May’, ’Running With Scissors’, ’Skip And Jump’. They’re all inoffensive enough, and I can imagine them working well live as a bit of a jam between songs. But at the same time, the first two don’t really leap off the CD and grab me. ’Skip and Jump’ has a bit more to it, and really does catch fire in the second half of the tune, but even so, it still feels a bit like filler compared to the rest of the album.

Overall though, this is an impressive debut, beautiful both lyrically and musically. And all without a bucket-wearing guitarist in sight.

Released by Gilmore Roberts on 2 March 2009.