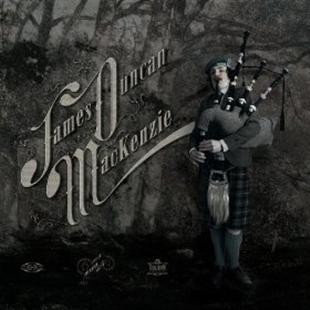 The self-titled debut solo album of James Duncan Mackenzie is a collection of self-written and traditional Scottish tunes. Specialising in the bagpipes, whistle and flute, Mackenzie is mostly likely to be recognised as a member of the Scottish Folk Band of the Year Award 2012 winners, Breabach. Therefore this album is an exciting milestone in Mackenzie’s rich and broad development as an esteemed composer and musician.

The tone of the album is a lamenting celebration of the history, memories and stories that belong to Scotland. It is introduced by Smelling Fresh, a collection of four fine tunes led by the enchanting and lively call of the bagpipes.

The gentle and swinging pieces in Anna Mackenzie’s cleverly contrast with Strathspeys & Reels, the simple collection of Mackenzie’s favoured strathspeys and reels that celebrate the bagpipes at their best.

Demonstrating the diversity of Mackenzie’s skills, the flute vocalises a sorrowful traditional gaelic song, the melody and emotion all the more poignant for the lack of lyrics in A Mhairead Og.

The energetic and engaging 2/4 Marches and Quickstep & 9/8 Marches allow the bagpipes to really shine with minimal accompaniment.

The beautiful melody of the haunting and husky flute soars in the waltz and jigs of Bridge to Nowhere and Eyes to the Sky, balanced earthily by the strong and bright tone of the pipes and supported by the gentle lull of the acoustic guitar.

The introspective and melodic self-penned tune Second Sight gives the mood of a pensive reflection of long-gone memories. The woody tones of the flute breathe life into the supernatural core of this piece.

The album closes with the Lament for the Iolaire, in which bagpipes sound the true and moving tale in the history of the Isle of Lewis, of the hundreds of lives that were lost when a boat sank in 1919.

This album captures perfectly the essence of all that is Scottish with an eloquent and articulate presentation of emotive, lamenting tunes and fierce, energetic jigs. It boasts many different musical elements that proudly encapsulate the wealth of skills and experiences that have led Mackenzie to this solo endeavour.

James Duncan Mackenzie stands for itself as an absorbing and outstanding album that is sure to be appreciated by all with an appreciation for traditional, Scottish folk.