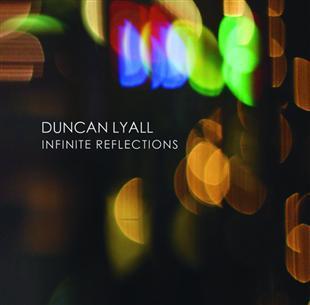 Having already demonstrated undeniable talent as a producer and bassist - best known as a founder member of Treacherous Orchestra and for his work with Kate Rusby and John Goldie - Duncan Lyall’s solo album now demonstrates his strength as a composer.

Specially commissioned by Celtic Connections for the New Voices 2012 series, Infinite Reflections is bursting with originality and creativity. It is certainly an album not to be missed.

Taking charge of double bass, bass guitar, synths, programming, shakers and shruti box, Duncan proves why he is a musician in demand. His ability to lift performances with both power and sensitivity along with his careful interpretation and use of different technologies is certainly to be applauded.

The album is purely instrumental but by no means conforms to what we might expect to hear as a result. You would have a hard job identifying the usual sets of tunes in amongst such powerful and exciting performances.

Duncan’s inspirations for the album are drawn predominantly from personal experience, but ultimately he entrusts the listener with the role of story-maker. And despite focusing on instrumental composition, each track successfully fills in the gaps where narrative has been omitted.

The album is certainly energetic and presents polished performances on traditional instruments fused with electronic sounds. This makes each track truly inventive and innovative with unexpected twists and turns. Riffs often become hypnotic and were it not for the introduction of melodies to break up each cycle, its mesmerising effect would surely keep us long under its spell.

The album has a futuristic feel to it. The aforementioned use of traditional instruments and the occasional jig or reel confirms the album’s influences but Duncan seems to have taken folk music one step further away from its roots and he takes joy in exploring and celebrating its evolution. This is done with commendable intelligence and makes the album an interesting as well as an enjoyable listen.

The melodies are flawless and sit above the entwining accompaniments, channelling the attention of the listener in several directions. Duncan’s understanding of the relationship between instruments, sounds and effects contributes to extraordinary detail throughout the album.

Infinite Reflections is packed with interest and variety. With Scene III (one of the more delicate tracks) lasting a mere thirty-five seconds and Scene VII and The Beast focusing solely on the raw beauty of individual instruments, the longer and louder and pieces really do pack a punch.

A whirlwind of sounds, effects, tempos and textures, Infinite Reflections is folk music as you’ve never heard it before. And as an album to an ’infinite number of stories’ it is sure to capture the imagination of audiences far and wide.